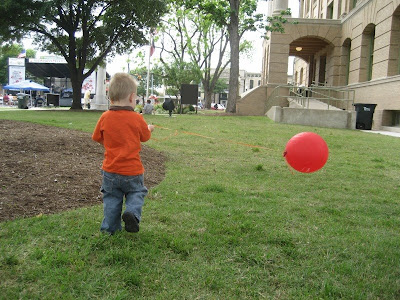 I was just looking through all my balloon photos in more detail and thought these were worth sharing here as well. He's such a sweetheart.... *gush* 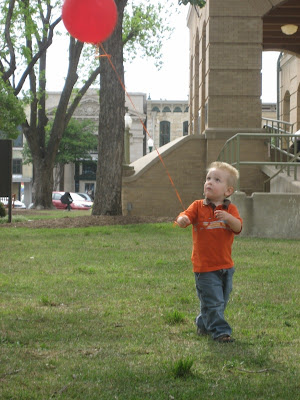 A Weekend of Foam and Balloons... 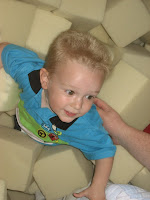 We had a fun time with Chase this weekend. Saturday we went to his friend Tyler's 3rd birthday party. It was at Texas Tumblers and he got to jump on trampolines and play in giant foam pits. He had a blast!

Then Sunday we went to Georgetown for their Red Poppy Festival. The highlight for Chase was getting a free balloon, which provided me with the opportunity to take some sweet photos and (as you can probably see) gave me the inspiration to finally update the look of our blog (he was 8 months old in our old header)! 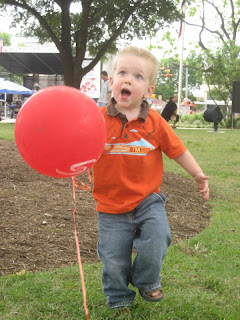 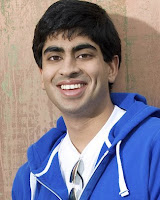 America got it absolutely right this week. I am thrilled Matt didn't go home, after they saved him last week. He is probably my favorite, though I know he won't win. I just think his voice is so cool, and behind the piano he is amazing. I voted for the first time this week (for him), just to help him stick around one more week! It was much easier to vote with our new AT&T wireless text message option.

Anyway, I liked Anoop and he has a really beautiful voice, but I really didn't like his song this week. It was weird for me (hey, I sound like Randy!). And against the other remaining contestants he just wasn't as strong.

I have been waiting for Lil Rounds to go for awhile now. She has a great voice but she had no originality (OK, now I'm Simon!). And I don't know.... I just didn't like her personality much, either. She just seemed to have a chip on her shoulder.

This is how I hope the rest of the eliminations go: Allison, then Matt, then Danny, then Chris, and Adam wins. I know everyone says it's going to come down to Danny and Adam, and they're probably right. But I think Chris is more original.

I think it will go: Matt, Allison, Chris, Danny, and Adam wins. 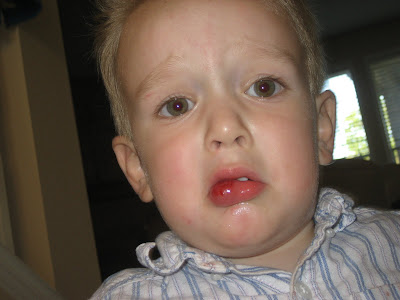 Yes, he landed face first on the tile and bit through (not completely through, thank goodness) his bottom lip. Blood was everywhere. Tears were shed. I'm a little worried one of his top teeth is loose (it was all bloody around the gum line), but so far so good. It looks much better today than it did yesterday! The photos don't do it justice, but here's a side view of my Bubba Gump (click on the photo for a better view): 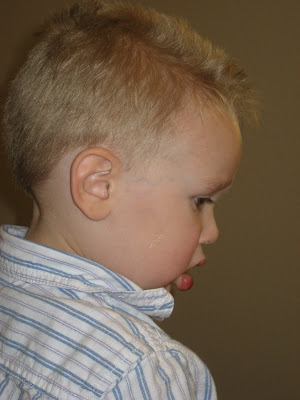 More photos are in our Photo Album if you're interested.
at April 14, 2009 No comments:

Wow, three posts in two days! I am so impressed with myself.

I just had to share this video I took of Chase while we were all playing today. He was certainly in rare form.... Enjoy!

Oh, the monkey you see on his back is his new "backpack." It is actually one of those child harnesses we swore we would never buy, but with all the travel we have planned this year, (especially the trip to Idaho we're taking this summer, just Chase and me), we worried he would be hard to keep track of at times when I have to unload our bags from the carousel or send everything through the security scanners, etc. So we got him one, just in case it turns out we need it. I mean, he's two. One of his favorite games is to wander around and then run away when you tell him to come here. Not exactly the kind of game I want to play in a crowded airport with my arms full of luggage.

Anyway, we thought we would give it to him early to get him used to it. It really is a backpack, and then the harness part you just hook to the back of it. So we figured we would have him wear his backpack at the airport, and if we need the harness part we can hook it on, and easily take it back off again. He loves his monkey backpack. He wore it all day!
at April 12, 2009 2 comments: 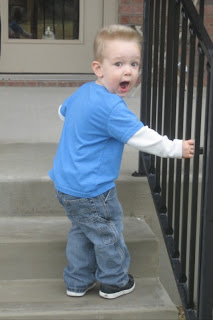 The Easter Bunny came to our house last night and hid eggs all over the place... inside and outside! Here are a few video snippets from our hunt:


It was not the perfect day for an outdoor hunt. It rained pretty hard last night so it was all wet and muddy, and toward the end of our hunt it started sprinkling and thundering. But Chase didn't seem to mind! 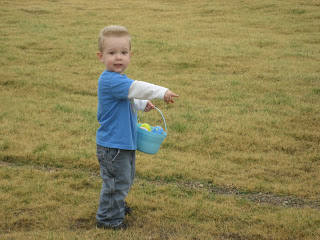 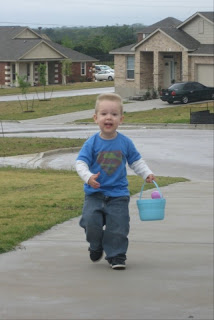 Happy Easter!
(There are more photos in our Photo Album if you're interested!)
at April 12, 2009 No comments:

Slidin' and Swingin' into Easter 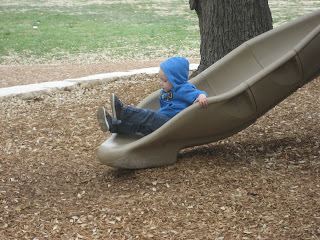 Chase went down the slide by himself for the first time yesterday. Our son does not have the adventure gene. We have been trying to get him to go down the slide for quite awhile now, and yesterday he just climbed on up and slid down like he had been doing it forever. Now that's all he wants to do... which is why we went back today!

After we were done on the slide he decided he wanted to push the swings. Not swing, just push them: 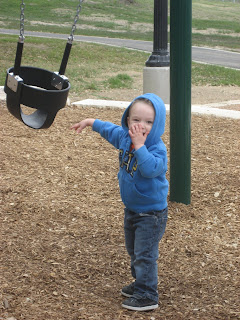 At one point the swing came back and hit him in the face. For some reason, after the tears cleared, that incident turned it into a game for him:

After the park we came home and colored Easter eggs. That was a lot of fun. Chase really got into it!


I asked him to hold up an egg and smile for me. This is what I got: 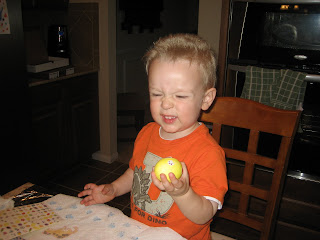 Afterwards Chase let me decorate him with the leftover stickers: 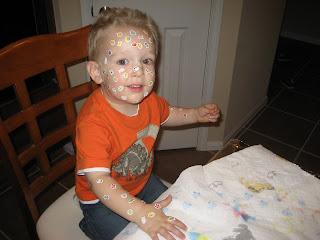 We're ready for the Easter Bunny!

We have quite a few trips planned this year, so we thought it was a good time to replace our old luggage. Chase got his very own suitcase, too, and when it all arrived yesterday Chase and Daddy had a lot of fun rolling their new bags up and down the hall....

So this week we said goodbye to Scott on American Idol. Let me just start by saying I have been ready for him to go for weeks now. I thought he was an incredible inspiration and a great musical talent, but I never loved his voice. It was definitely time for him to go.

However, after the way they treated him in the "sing for your life" portion of the competition, mulling over whether or not to keep him around... hemming and hawing about it... keeping him hanging for the longest time.... After all that I was so upset I wanted him to stick around another week. That was just wrong, to dangle that carrot and then yank it away the way they did. Have I mentioned before that I hate this new part of the competition? The idea isn't bad, but the way they are handling it is cruel.
at April 09, 2009 1 comment:

Are you ready for this? To prove just how fanatic this family is about Mizzou, go to Google and search for "true Mizzou fan."

Email ThisBlogThis!Share to TwitterShare to FacebookShare to Pinterest
Labels: Sports

Brian is graduating. It's finally happening! He will be walking at NIU's graduation May 8th, and defending his dissertation May 12th. We are currently working on our travel plans to Chicago that weekend and it is so exciting!

I am so proud of my hubby. He has been working toward this goal for so long. The entire time we have been together (9 years), he has been a student... between getting his Masters and Doctorate degrees. Can you believe it? Please send a big congratulations out to him. He truly deserves it!
at April 04, 2009 1 comment: It was time. I really liked Megan in the beginning but then I got frustrated with her because she didn't seem to be going anywhere. It also got to the point where I felt like she was always forcing her voice, when on her "behind the scenes" footage I would hear this beautiful, effortless tone in her upper register that she wasn't using on stage. I found her last moments on the show tonight awkward, but I think she knew she was going home and was just trying to get through it the best way she knew how.
at April 01, 2009 No comments: