I don't know if I've ever been called an inspiration before, but someone called me that today and I am just glowing as a result.

Remember when I joined Curves? Well I am proud to report that since joining I have lost almost 30 pounds (27.5, to be exact). I now weigh less than I did before I was pregnant! So a lady at work asked me what I was doing to lose weight and I told her all about my experience with Curves. Well, she told me today that she joined last week, and that I was her inspiration. What a wonderful compliment!

I won't bore everyone with all my Curves babble, but if any of you other women out there are interested in learning more about it, contact me and I will tell all. Sometimes I think I need to be their spokesperson because I'm a walking advertisement, anyway, the way I go on and on about it. It's such a great program! 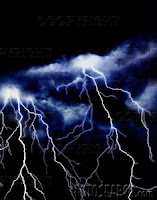 Last night we got some pretty incredible thunderstorms. I absolutely love thunderstorms. They started around 8:30 and we turned the lights out and just lay in bed watching and listening.

After about an hour Chase woke up... not because the storm scared him, but because he hasn't been sleeping well lately (he's teething again) and the last few nights he's woken up several times. We let him cry for about 1/2 hour because he wasn't screaming like he was scared, just moaning and fussing. After 1/2 hour we said, "well there's no way he's going to be able to go back to sleep with the storms going on" so we went in and got him and brought him into bed with us. He wasn't afraid of the storms at all.... He was completely intrigued. Every time there was a huge flash of lightning or crack of thunder he would just stare in wonder. It was so amazing.

After the storms started calming down we put him back to bed and he went right to sleep. It is just amazing to me.... You would think the huge flashes of light and loud banging would scare a baby that doesn't have any idea what's going on... but he actually enjoyed it, too. It was so amazing to share that with him.

The storms lasted several hours. It was so cool. The Chicago area lost a lot of power last night and our internet went down but it was so worth it!
at July 19, 2007 1 comment: 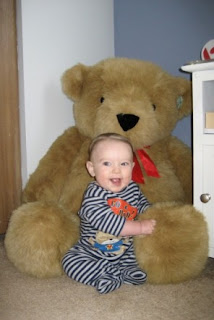 Click here to compare it to his 6 month photo!

You can also see a slideshow of his month photos on Chase's Info Page, FYI. [Update 1/18/08: This page no longer exists. If you would like me to email you a slideshow of the progression, let me know!] 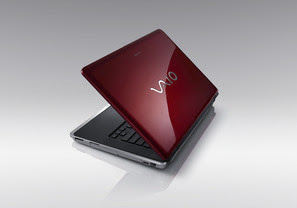 I'm blogging from my new toy! I have been in dire need of a new computer for awhile. The one I had been using was a desktop and was about 6 years old. It was soooooooo ssssllllooooowwwwwwwwwwww....

I decided for my next computer I wanted a laptop vs. a desktop so I could take it with me to my theatre company's rehearsals/performances/etc. So we headed to Best Buy yesterday and bought my new toy. My favorite feature: IT'S RED!
at July 15, 2007 No comments:

4th of July and a trip to St. Louis 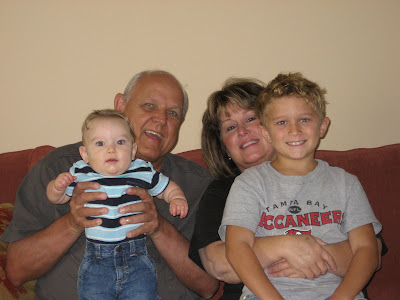 We really lucked out on the 4th of July this year because they shot off fireworks right across the street from our house! We did our Friday Night Game Night on the 4th (because we were going to be out of town on Friday) and then walked outside and sat on our back porch for the show. We took the baby monitor out, sure the big booms would wake Chase, but the kid slept through the entire thing! Afterwards we watched the swarms of people flock to their cars and try to get out of there while we just walked inside, put our PJ's on and climbed into bed. It was VERY nice!

The next morning we left for Brian's parents' house in St. Louis. His sister, Jen, and our nephew, Ryan, were up from Florida so it was a great opportunity to see everyone. We had a busy few days! Highlights:

We had a great weekend, but now it's back to work! Hope everyone else had a nice holiday! Photos of our trip are posted in our Photo Album.

So Brian and I finally had a chance to celebrate our 4-year wedding anniversary on Friday (our anniversary was the 21st). We started it off by feeling incredibly old: Up until that point we had used friends/family for babysitting on the rare occasions we’ve had the chance to go out. Well this time we hired a real babysitter. After I left her all the instructions and emergency contact information, showed her around the house, introduced her to our remotes, etc., we left. After we closed the door and started the walk to the car I said, "omigod, we are officially old." I remember when IIIIIII was the babysitter and I thought the people I babysat for were so old! *sigh* It was bound to happen, I guess.

And then after all that, the babysitter stole our remote! Saturday morning Brian went downstairs to watch some TV and he couldn’t find it anywhere. About ½ hour later our phone rang. It was our babysitter who was so embarrassed because she had just found our remote in her purse! We got a good laugh out of it.

Anyway, we had a very nice date. We went to dinner and then saw "Fantastic 4." It was OK. Brian liked it better than the 1st one, I liked the 1st one better. It was really nice to get out to the movies again. We used to go to movies ALL THE TIME and I think the last time we went was in March. We’ve been deprived!

And because our date was on Friday night we had to move "Friday Night Game Night" to Saturday. They are so fun. We’re becoming obsessed.... We bought 4 more games this weekend!

We also bought baby gates this weekend. Chase is now becoming more mobile. Not only is he rolling all over the place, he’s starting to scoot on his stomach and the way he’s bringing his legs under him to push off made us realize, "Wow, crawling is not too far away!" Time to start the "baby proofing" process around the house!

I think that’s it for our weekend update. Hope everyone else had a great one!
at July 02, 2007 No comments: