It was a Mother/Son bonding weekend for Chase and me. While Brian taught his weekend class at Argosy we got to hang out and play all weekend long, just the 2 of us! Of course he did get a fever Friday night which almost ruined our plans, but after a trip to the doctor on Saturday afternoon he was feeling much better.

Just thought I'd share this video clip of Chase jammin' at his piano (and this is the tame version)! He LOVES this video of himself, by the way. It makes him laugh every time. ;)

P.S. I LOVE that I can download videos right to Blogger now vs. going through YouTube. I'm sure you'll see much more videos posted as a result! 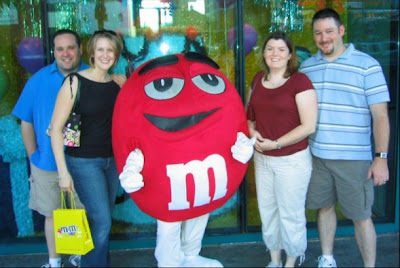 We just got back from Las Vegas! We spent 4 days there with our friends Katie and Ryan while Chase spent the weekend at “Camp Grandma & Grandpa W.” Highlights from our trip:

Photos of our trip are now posted in our Photo Album! 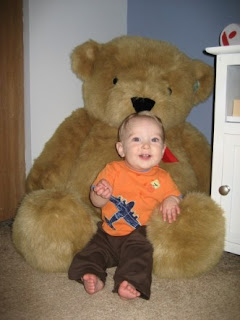 Click here to compare it to his 8 month photo!

You can see more teeth in this photo than the others. He now has EIGHT of them! Chase also went to the doctor today and he is now 20 lbs (50th percentile) and 28 1/2" long (60th percentile).

His slideshow has been updated on Chase's Info Page if you're interested in seeing the progression. [Update 1/18/08: This page no longer exists. If you would like me to email you a slideshow of the progression, let me know!]

Random photos taken over the last month are also posted in our Photo Album (labeled "Chase: 8 Months - Misc.").
at September 17, 2007 No comments: 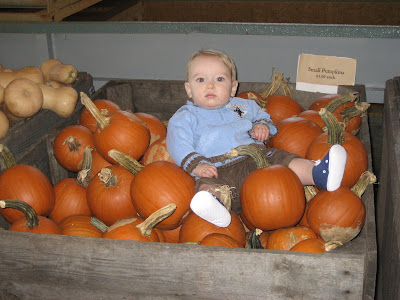 It was a perfect fall day yesterday for our annual trip to Edwards Apple Orchard, and this time we had an extra person in tow! Chase got to try some of Brian's favorite apples (Honeycrisp) and a little of my apple pie (and MAN did he like THAT)! We saw some animals and listened to the band for awhile, and just because we couldn't resist, we stuck him in a barrel of pumpkins in the middle of their country store and snapped this quick pic. If I hadn't been in such a hurry to get out of there before someone gasped, "What is that mother doing putting her kid in the produce?!?" I would have taken the time to try to get a better one! 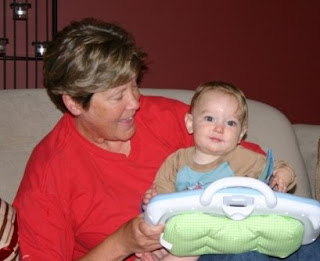 Last weekend Brian had to teach a weekend class at Argosy so my mom came to Chicago to do some scrapbooking and play with her favorite grandson (I can say that because he's her ONLY grandson)! We bought out Archivers and I finally started on Chase's baby album. I only got through the first three months of his life but at least I got started! 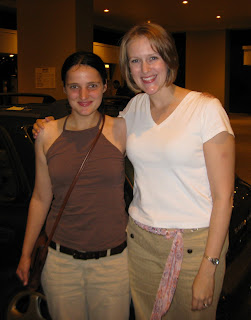 (I tried to come up with a more clever title but my brain is not functioning.)

I had to go to Atlanta for an all-day meeting yesterday. I flew in Monday night and out Tuesday night. It would have been a pretty boring trip but I took the opportunity to have dinner with my wonderful friend Janet while I was there! She is doing an internship about an hour and a half away and she was kind enough to drive all the way over to have dinner with me! As always, I learned so much from her... about horse acupuncture, camel dentistry and the unbelievably exciting (*drum roll, please*)... World Rabies Day!! (Next year I'm totally throwing a party for it.) I'm afraid all I had to offer her were stories of boogers and poop. Come to think of it, she had some of those stories for me, too.

So, anyway, Monday night in Atlanta was fun. Tuesday night was not. My plane was delayed and I spent many hours in the airport watching a special on Osama Bin Laden that was playing on all the TV's. Now maybe I'm overreacting but it just seemed a bit tasteless and insensitive to play that on 9/11 in the airport. At any rate, I came out of it all with just a mild case of sleep deprivation (hence my lack of brain function for a snappy title to this blog). 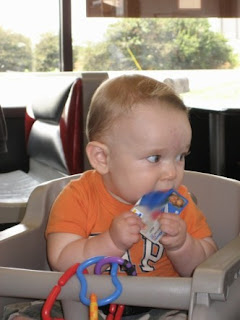 I'm finally nesting. Leave it to me to procrastinate nesting, which I should have done a year ago... BEFORE Chase was born! But now that he's crawling around I'm freaking out about our incredibly messy house and starting to go nuts cleaning stuff out and everything. I just don't need to turn around one day to find Chase has swallowed a lost tube sock or something. So this weekend I got brave and looked under the bed to see what fun things Chase could find there. Let's see... A pack of gum, underwear, a couple cat toys and a slurpee cup top. All of which were Brian's, I might add. Well, except the cat toys.

But seriously.... Anything Chase can't have, he wants. Everyone told me this but now that I've seen it with my own eyes I feel like I can pass it along as advice: When you have kids, don't buy toys. They will want to play with the stapler instead. The photo above illustrates my point. Aunt Jen's credit card was the ONLY thing that would get him to quiet down while we were all out to eat in St. Louis a couple months ago.

Chase's new favorite toy is a prescription pill bottle. He found it from when I had the flu this summer and it was apparently a really fun rattle. So I cleaned it out and filled it with Cheerios just in case he was a super genius and figured out how to open the childproof cap. It wasn't until we went out to Taco Bell yesterday and everyone was staring at us funny that I looked at my son, the bottle shoved in his mouth, and thought, "This probably looks really bad...."
at September 04, 2007 3 comments:

Last Zoo Trip of the Summer 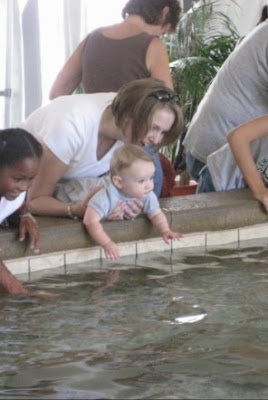 I took some time off work Friday afternoon to join Brian and Chase on their last zoo trip of the summer. We pet the stingrays (Chase pretty much just splashed in the water) and checked out some of the other animals. Goodbye, summer! Can you believe it?!?