Brian is battling his first ever case of pink eye....  And it is BAD.  I've had pink eye before, but nothing like what he is going through.  The poor guy can hardly see, he is super sensitive to light and he feels stabbing pain, not just annoying itchiness stuff.  We took him to an Urgent Care on Sunday and it's a viral infection, so there's nothing they can do to treat it.  He has a prescription to protect his eyes but nothing to cure it.

With his sensitivity to light and the fact that my stubborn husband still tried to work this week, I bought him a pair of sunglasses for the car.  Last night I walked around the corner to see him sporting his new style on the couch: 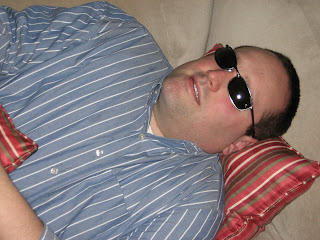 I had to BEG him to take this picture, but he was a sport... until the flash went off and he screamed out in pain, anyway!

Conversations With a 3-Year-Old: Halloween

So Brian was talking to Chase about Easter this morning, asking him if he remembered hunting for eggs last year, etc. He said he remembered and even recalled specific details, which is amazing to me! He definitely got his memory from his dad. Anyway, somehow Chase got started on Halloween. So Brian asked Chase what he wanted to be for Halloween this year. His response:

Email ThisBlogThis!Share to TwitterShare to FacebookShare to Pinterest
Labels: Chase, Conversations With a 3-Year-Old

I guess all the redecorating we have done this week has inspired our son. Today he took the opportunity during nap time to decorate his room with stickers. Thank goodness he chose to redecorate his old toy box (which we just put in there to set his humidifier on since he's been sick) vs. his new bed! Check it out. Here's the top: 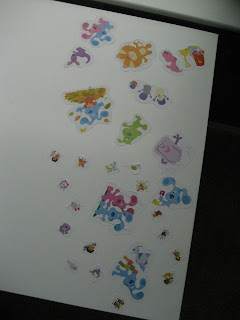 And here's the side: 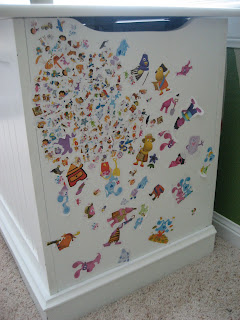 And I want you to really zoom in and notice the fact that these are TINY stickers in MANY layers. It must have taken him forever to do this! 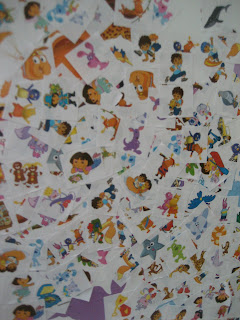 Over spring break we finally had the opportunity to convert Chase's room into a "big brother room." I have been wanting to redecorate his room for a long time, but we knew baby #2 was coming at some point and thought that would be the perfect time to do it (since the baby will get his old furniture). I painted for a few days this week and his new bed came in. We are still waiting on his dresser, but other than that, the room is DONE!

Here's a "before" picture for you. It isn't exactly how it looked before, but it's pretty close. This picture was taken right after we moved in over a year and a half ago, when Chase was still in his crib (and then, shortly after we converted his crib into a daybed, we had to take all the toys out or he wouldn't sleep)! But other than that, the room has pretty much stayed the same: 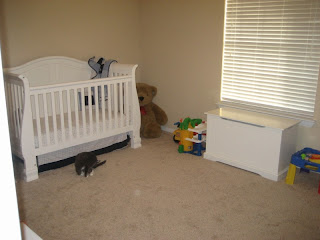 And here are the "afters." New bed: 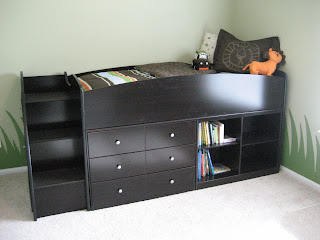 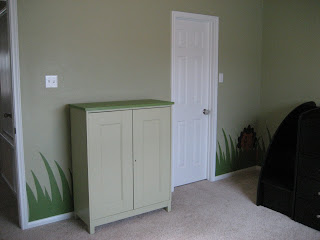 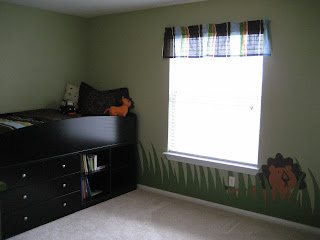 (And new paint job, of course.) Here's a closeup of one of the lions: 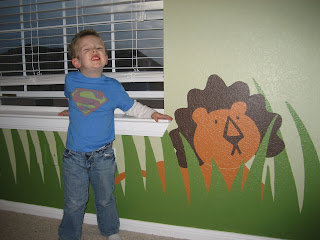 Before you ooh and ahh over my artistic masterpiece on the walls, I must confess it was all done by projecting images onto the wall with an LCD projector and tracing them. I found a clipart image for the grass... 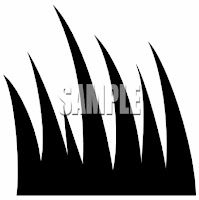 ...and for the lions I took an actual picture of the stuffed lion that you see on the bed: 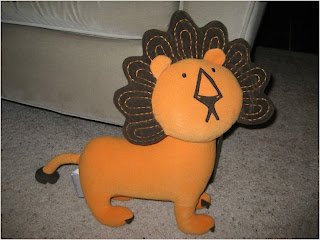 And Brian helped! He painted a lot of the grass. After a day of painting all that detail on the floor (each lion took me an hour and a half!) I could barely walk. My back was killing me! But it was worth it. We love how it turned out and Chase likes it, too.

Not like Chase jumped up and down or anything. He has been home sick since Tuesday afternoon. He has some sort of a bug (fever/red eyes/runny nose/etc.) on top of some, well... digestive issues. Let's just say the sewer is backed up and we have had to do some system flushing.

It's a Beautiful Day 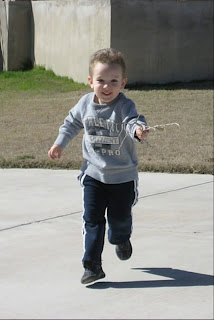 It's a beautiful day today for several reasons. #1, I am officially on Spring Break! #2, my Drama Club's show is over and we won 1st place at our theatre festival competition yesterday! #3, it actually was a beautiful day here, weather-wise. So we went outside to play!

First, Chase showed off his mad kickball skills. Brian was proud of his powerful kicks, while I admired his form. I mean, look at this beautiful extension! 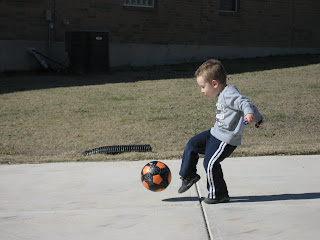 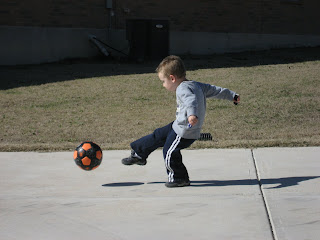 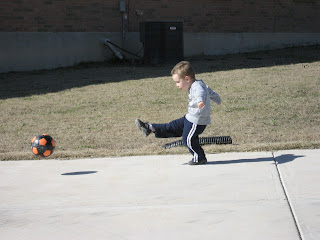 Then we attempted to get him back on his bike: 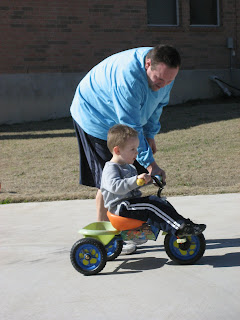 He tried it for a bit but still didn't get the hang of it, so he gave up and decided to push it around again (just like last time): 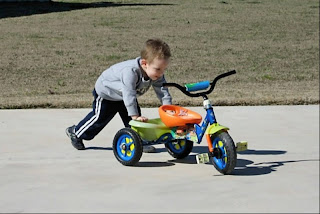 Chase got curious about the ugly black tubing that is always in the back of our "playing in the driveway" photos: 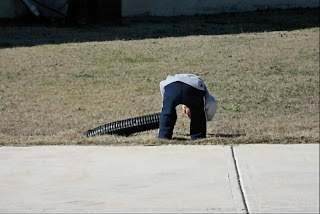 (I'm just grateful there wasn't a snake living in there or something!)

After a bit we decided to go hang out on the back porch. Chase took his camera (one of his new favorite things) and had some fun taking photos outside: 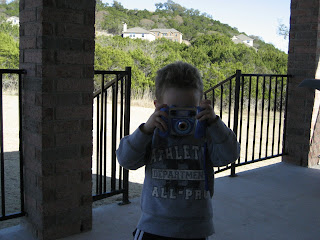 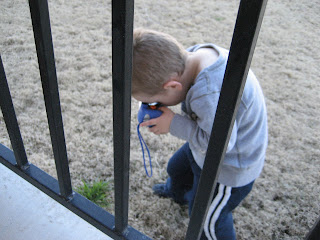 Here are a few of his masterpieces: 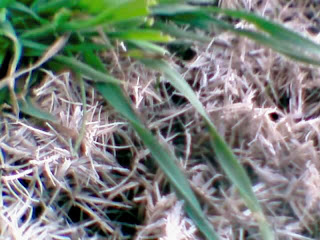 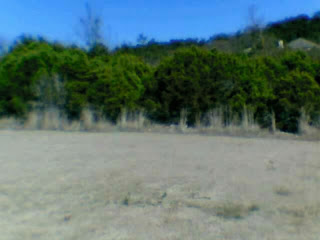 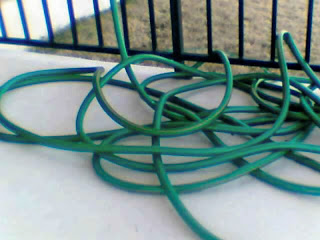 I set up a group room for Chase's photos: Chase's World. I will update it periodically as I download the very interesting and insightful photographs from his camera. You need a code to get in. If you want it, let me know. It's the same as our family photo album's code. Enjoy!
at March 13, 2010 No comments: