It's been a record number of days since I've posted anything and I'm going nuts! I just haven't had anything newsworthy to post in the last week! So if you're at all interested, here's a summary of the meaningless goings on in our life since my last post:

I think that about sums it up! Aren't you glad you read it all? You must be as bored as I am! ;) 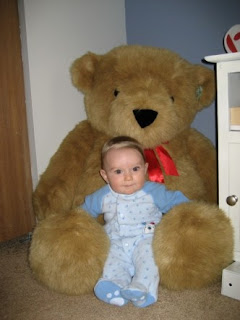 Chase turned 6 months old on Saturday (I can't believe it)! Here is his 6 month photo.

Click here to compare it to his 5 month photo!

You can also see a slideshow of his month photos on Chase's Info Page, FYI. [Update 1/18/08: This page no longer exists. If you would like me to email you a slideshow of the progression, let me know!]

At his 6-month doctor's appointment this morning we learned he now weighs 17lbs 14oz (60th percentile) and is 27" long (75th percentile)! 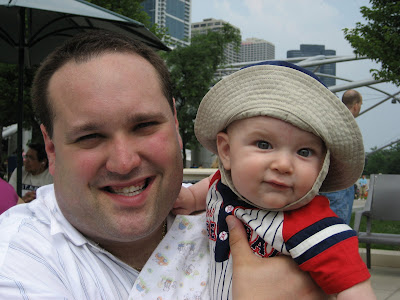 Today was Brian's first Father's Day! To celebrate we decided to take Chase on his first trip downtown to explore Millennium Park. We walked around, played in the fountains and marveled at our reflections in the giant jelly bean (for lack of the sculpture's official title)!

Afterwards Chase and I took Dad out for dinner, where he (Chase, not Brian) sat on his own in a restaurant high chair for the first time (he thought that was pretty cool). While we were eating, a cute little old man came in and when he saw the baby he got really excited and made a beeline for him. Well, the sweet man kind of snuck up on Chase (not meaning to) while he was looking at something intently and ended up scaring the you-know-what out of him! He screamed bloody murder and the couple the old man was with said they should probaby sit far away from us so as not to scare him throughout our dinner! Brian and I laughed for a long time about it but I felt soooooooo bad for that cute little old man who was so excited to play with the baby!

Anyway, before I end this post I just want to shout out another "Happy Father's Day" to my amazing hubby, who goes above and beyond the call of "Daddy Duty" by taking such great care of our baby all day, every day. I love you, Baby!

Photos of our day in the city are posted in our Photo Album. Enjoy!
at June 17, 2007 No comments: 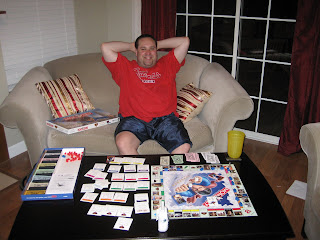 Tired of the usual Friday night Blockbuster and/or DVR date, last night we decided to start a "Friday Night Game Night" at our house. We opened with Monopoly. Note to self: Never play Monopoly with someone who is better with money than you are.

Brian slaughtered me, and made sure he gloated about it. It was so obvious toward the end that I was doomed. He owned EVERYTHING, but he wouldn't quit until I was completely bankrupt. Now that's love! ;)
at June 16, 2007 1 comment:

Chicago is experiencing a cicada invasion. And I do mean INVASION! Yesterday after work I drove up to a gas station and ended up just driving away because I was too terrified to get out of my car! I pulled the following Chicago area photos from cbs2chicago.com to show you I am not exaggerating. The seagulls (another favorite of mine) love them!

We had been warned of the cicada invasion on the news and on the radio because they only come out once every 17 years here (and this was the year for it!), but the first time we noticed them was on our drive home from Michigan on Monday. It just seemed like Brian was hitting massive bugs right and left and I said, "What is going on?!? Are they attracted to your car or something?" Brian said, "Maybe it's the cicadas," and I looked out my window only to see them SWARMING around the area. The sound of them buzzing was so loud and they were skidding all over the highway as cars drove through. CREEPY!!!!

Later that night I opened the door to the garage only to have one whip right by my face and into the house! It must have hitched a ride on my car. I started screaming as it flew like a maniac around our kitchen and dining room. Boomerang (our cat) was going CRAZY! I screamed, "Boomerang, I know you're not supposed to get on the counters but do whatever you have to do to get that thing!" Finally it flew into one of the globes of our dining room chandelier and I trapped it! 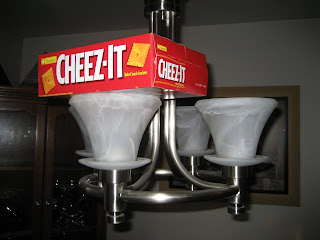 Yes, I know the Cheez-It box is a bit of a tacky addition to our dining room but I am not taking it off until that thing is DEAD!
at June 13, 2007 2 comments: 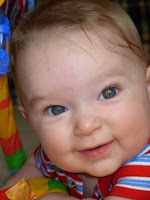 Photos of Chase's weekend with my parents are now posted in our Photo Album. Check them out!
at June 13, 2007 No comments: 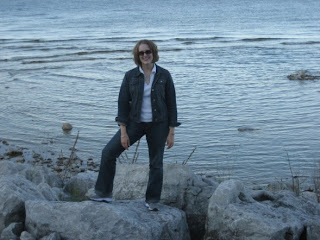 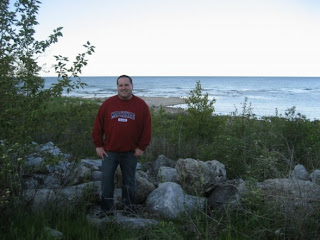 Brian took me to Mackinac Island for my 30th birthday this year, while Chase spent the weekend with his Grandma and Grandpa K. We had such a wonderful time! We:
We stayed right on the island at The Island House and they gave us a great room because Brian had told them it was my birthday! It was one of the biggest rooms and it overlooked the water and downtown. The view was so beautiful. Here are a few representative photos of our trip:

The rest of the pictures of our weekend are posted in our Photo Album, and photos of Chase's weekend with my parents will also be posted there soon!
at June 12, 2007 2 comments:

Just thought I'd share this photo of Chase showing off his two brand new bottom teeth! I honestly didn't think it was possible, but they have made him even cuter. ;)
at June 05, 2007 No comments:

I can hardly believe it myself, but Chase's first tooth now has a next door neighbor, as of yesterday!
at June 02, 2007 No comments: