Conversations With a 2-Year-Old: A New Species

This is a sampling of dialogue we had in the car the other night:

Piano Prodigy in the Making

Chase and I are home alone today while Daddy is at work. I took the opportunity to add a little more culture to his life and we spent some time at the piano. We have played around at the piano before, but today's experience was hilarious because he took it so seriously this time! Check it out! (Facebook users, click "View Original Post" to see the video.)

The music is a little creepy, isn't it?

Chase really wants to help me at the computer right now ("Let me do it!") so we'll close this post with a message from him:

Conversations With a 2-Year-Old: Potty Training

We are starting to make some progress in the potty training department at our house. Chase is now asking to go pee-pee in the potty. We haven't had success with the #2's yet, but we're headed in the right direction at least! His habit lately has been going pee-pee, getting his 2 m&m's, and then 15 minutes later....

Chase: I have to go pee-pee!
Us: OK, let's go!
Chase: (after a minute of standing at the toilet) Hey! It's not working!

Hilarious. Like it's a fountain you can turn on and off at will whenever you want some more m&m's!
at September 24, 2009 No comments:

OK, I'm cheating. It's actually October 8th, but I'm pre-dating this because this post is almost three weeks overdue. I've been slack in the blogging department (which for me says a lot about my state of mind these days)! So today I'm catching up a little.

So we went to Waco for their Waco Cultural Arts Fest "today" (9/20, not 10/8!). It was fun but HOT. Afterward we went to the children's museum at Baylor, which we love. Here are a few photos from our day out.

Chase loved the bubble machine at the festival: 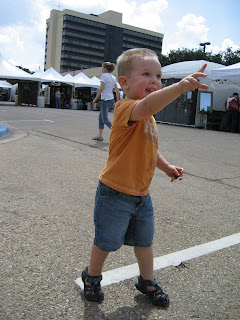 (Sorry you can't see the bubbles in this picture!) 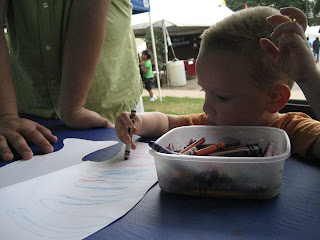 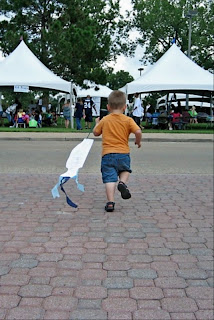 At the museum he had fun riding around in the cars (again): 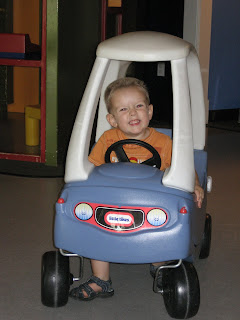 But the big hit at the museum this time was its huge train set. We could not tear him away! Here is a view of him above the display, loving every minute of it! 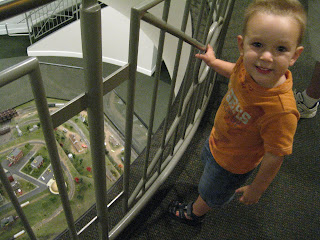 Conversations With a 2-Year-Old: Bullies

Brian and I are starting to worry that Chase is going to be the kid who all the bullies prey on in school. Here is a sampling of my conversations with him this week on the drive home from daycare, to illustrate my point:

Wednesday
Me: Did you have fun at daycare today?
Chase: Yeah.
Me: What did you do?
Chase: Alexander bit me.

Thursday
Me: Did you have fun at daycare today?
Chase: Yeah.
Me: What did you do?
Chase: Alexander bit my finger.

Friday
Me: Did you have fun at daycare today?
Chase: Yeah.
Me: Did Alexander bite you today?
Chase: No.
Me: Well, that's good!
Chase: Zachary pushed me down.
at September 19, 2009 4 comments:

Brian took this video of Chase while I was in class tonight (did I mention I'm taking a class?) and when I saw it I laughed so hard I could barely breathe. Enjoy! (Facebook users, don't forget you have to click "View Original Post" to see the video.)

P.S. I always said he got his intelligence from his dad.... 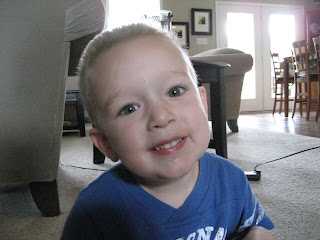 ...decided to have some fun making funny faces today: 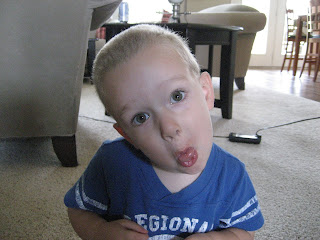 We had a lot of fun snapping photos of all his funny faces. Here is a little video of how the photo shoot went (Facebook users, you know the drill... click "View Original Post" to see this):
Chase was having so much fun I just had to join in! 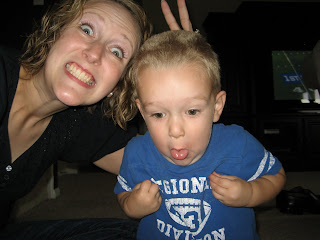 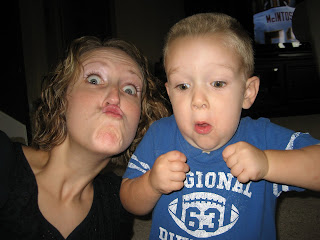 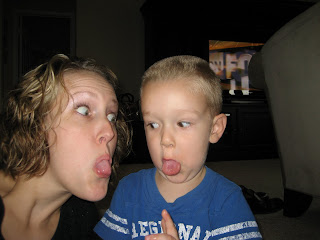 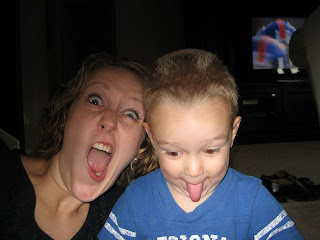 All the photos we took are in our Photo Album if you're interested! They are pretty fun. Reminder: You need a room code to access our photos. Contact us if you want it!
at September 13, 2009 3 comments:

Fun at the Zoo 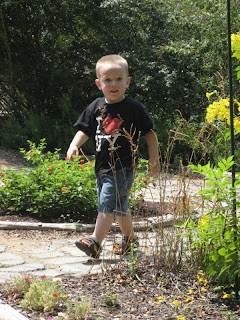 We spent our Labor day at the Waco Zoo today. It was HOT but we had a great time! Chase made friends very easily there. His first friends were the tiny monkeys (for lack of the technical term): 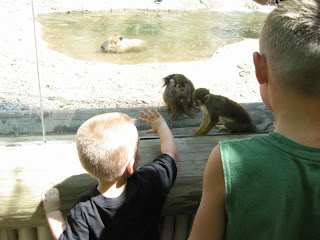 His favorite friend was what he called the "dinosaur," but was actually some sort of dragon (again, lacking the technical term... Brian says he thinks it was a "komodo" dragon): 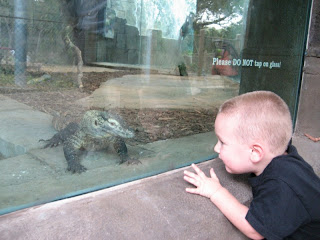 The dragon was seriously interested in Chase. They followed each other around the cage for awhile. He then had to have his photo taken on the giant "dinosaur:" 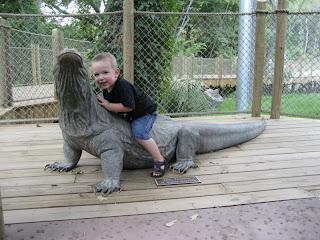 Chase is going through this mega "I want to do everything all by myself" phase. Today he had to pull his own wagon, which made us look like slave driver parents: 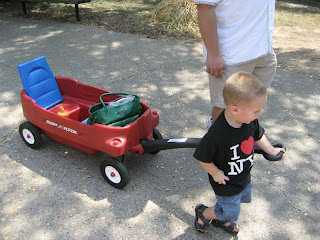 Toward the end of our trip there was this cool play area for kids and Chase had a blast on the coolest sidewalk chimes I have ever seen (Facebook viewers, click "View Original Post" to see this video):

There was also a cool section where you could swing on ropes, and though Chase wasn't quite ready for the swinging part, he loved to throw them around! 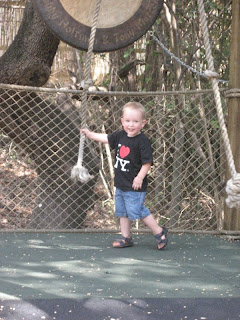 (He seriously could have stayed there forever!)

I hope everyone had a nice Labor Day! There are more photos in our Photo Album if you're interested.
at September 07, 2009 1 comment:

(But he loves them!) 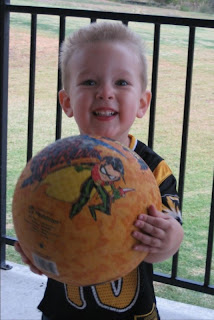 We heard some far-off thunder while playing inside today, and seeing as how the entire family loves a good storm, we headed out to the back porch to check it out. And since I have been lacking in the photo update department since school started up again, I took my camera out there with me. Enjoy! 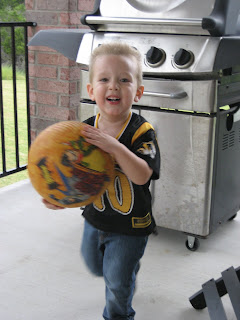 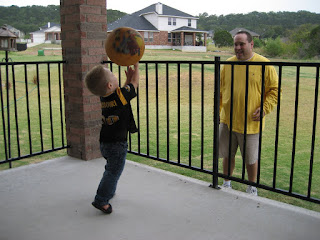 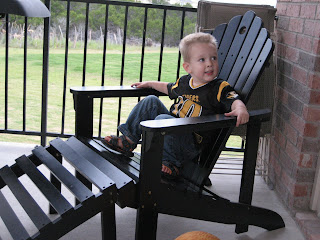 Apparently it's a slide: 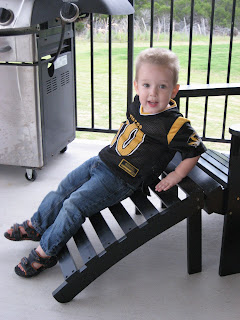 There are more photos in our Photo Album if you're interested!
at September 05, 2009 No comments: