So today I looked at my daughter and started calling her Pippi, because her hairdo is frighteningly similar to the Pippi Longstocking look: 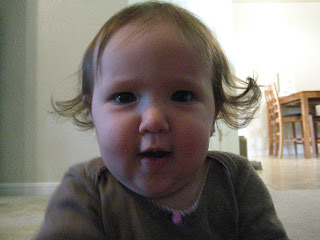 She's going to curse those flip-ups forever (like I curse mine). Anyway, as I looked at her I thought, "I wonder...."

Are you ready for this?  CUTE ATTACK! 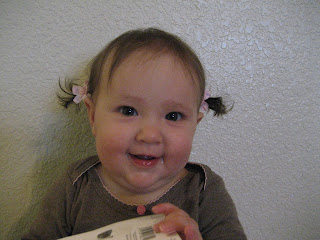 Is she a doll or what?!? They didn't last long before she yanked them out, but they were cute while they lasted! Chase kept wanting me to put them back in because he liked them, too.

Having a girl is going to be fun!

P.S. This is my second post of the day.  Check out the previous post if you haven't already!

Chase picks up after Chloe a lot. When she drops something, he rushes to get it. He's such a helpful big brother! Anyway, today Chloe was drinking her bottle in her high chair while Chase played a video game. She dropped the bottle and it crashed to the floor. Without a beat, or even a look away from his game, Chase called out:

"Mommy, will you get that, please?"

The tables were turned. The Big Brother was asking the Mommy to help him out. Hilarious.

Email ThisBlogThis!Share to TwitterShare to FacebookShare to Pinterest
Labels: Chase, Chloe, Conversations With a 4-Year-Old

Well, we had another winter blast last night and as a result school was canceled again today. It's funny. When I was IN school I prayed for snow days. And now, while I sometimes lay in bed in the mornings and think, "It would be nice...," there's a bigger part of me that knows I'm going to have to make that snow day up, and I would rather have a planned day off for a long weekend, etc., than a random day off with weather that's no fun to go out in. Ugh, it's no fun growing up sometimes. ANYWAY.... 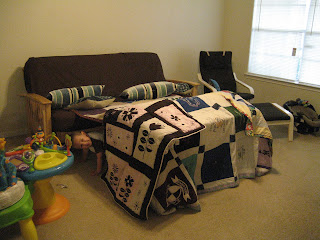 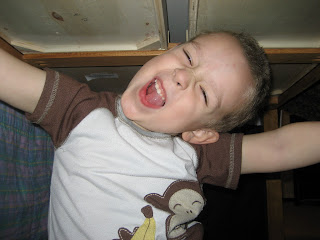 Chloe had fun inside the fort, too: 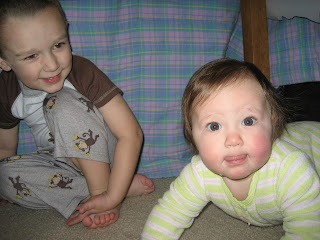 A little later Chase decided he wanted to do a 100-piece puzzle. I thought for sure it wouldn't last long, but he and I worked on it straight through (no breaks) until it was done. He kept saying, "Whoah, Mom.... This is tough!" It was quite cute. 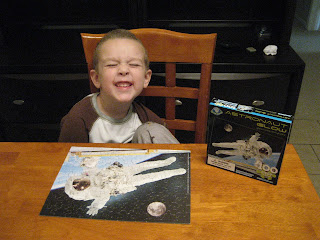 Chloe and I got some fun floor play time in, too. In this picture you can see her bottom two teeth (click on the photo for a larger view): 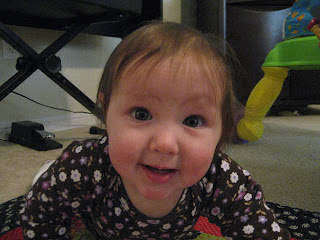 And then I just kept snapping pictures because she was being so cute! 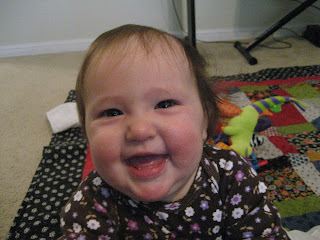 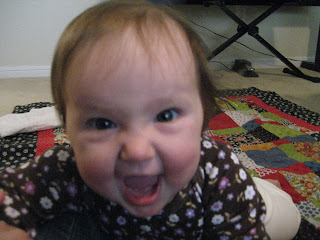 My friend Erin and her son Nathan invited us to see the "Singing Zoologist" with them this weekend. The kids had SO much fun! Here is a little video of them jamming to "Animals Rock!" NOTE: This is not the same video I posted on Facebook earlier.

My favorite part of this video is Chloe constantly trying to grab the camera! 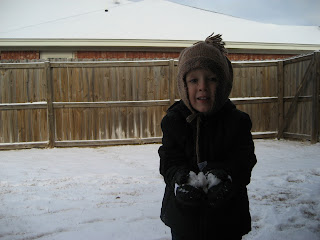 We had a heck of a morning. Last night when I went to bed I turned my alarm off because I was sure the next morning (today) was Saturday. The kids started stirring around 6:15 and I cursed them for getting up so early on a Saturday. Chase came in saying he was hungry and I sent him to get poptarts so I could sleep longer. Then Chloe got up around 6:45 and I thought, "Ugh, fine. I guess I'll get up." On my way to go get her it hit me that it was Friday!

I usually leave my house before 7am to get to work on time.

I FREAKED. I started barking orders. "Chase, clothes! Teeth! Shoes! Now!" I got Chloe dressed and shoved a bottle in her mouth while I attempted to wet down the parts of my hair that were sticking straight up and do something with my face. At 7:15 we were ready to go (I know, I am impressed with myself, too). As I was buckling Chloe up in her car seat inside, I caught a glimpse of something strange out the front window.

Crap, I wore heels. No time! Chase was PSYCHED. I got them all in the car and started out of the driveway when I realized my neighbor's car was in the driveway... and she's a teacher. Hmmmmm....

I turned the radio on and they mentioned there were a lot of school closings but didn't list them all, and my district really doesn't like to close unless it's absolutely necessary so I still wasn't convinced it was us. So I drove to daycare just in case. I didn't get very far out of my neighborhood before it became clear that NO ONE was out. You couldn't see the lanes in the road through the snow, and there were hardly any cars around. I drove to daycare and it was dark. So I got on my phone in the parking lot to check our website and saw that school was closed.

At this point Chase was beside himself with excitement and kept talking about playing in the snow, building snowmen, etc. But I had no gloves, so since we were out already we went to Wal-Mart. Wa-Mart had no gloves. The best I could get were workman gloves. Better than nothing!

Note to self: In the future, stock up on cold weather essentials from up north. It's been so unseasonally cold with this crazy winter storm sweeping across the nation that the other day my front door lock froze. I had no idea how I was going to get in my house, after shopping ALL OVER TOWN for de-icer and finding nothing. Thank goodness for a hot cup of water from McDonald's and a spray bottle (except that it just re-froze afterwards). Anyway, I digress.

We invited Daddy over to play in the snow. There wasn't enough to build a snowman and it was too powdery for snowballs, so we all just threw it around for as long as we could stand the cold.

How DID I ever live up north? I'm such a wuss about the cold now.

Anyway, Chase had a lot of fun playing with the snow on the slide. I only managed to get a couple of pics before my camera battery died. Enjoy! 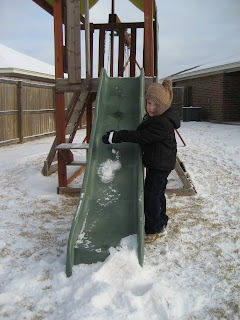 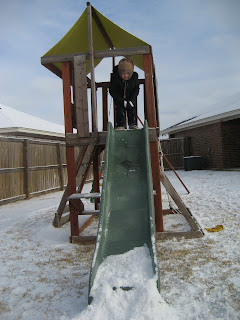