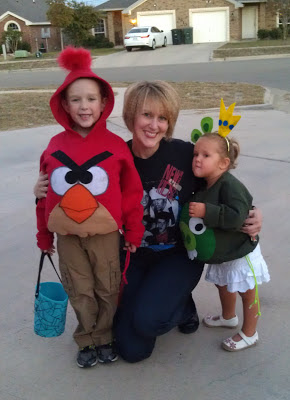 You all should know by now how I feel it is my obligation as a mother to make my kids' Halloween costumes every year, and this year was no different. I asked Chase what he wanted to be and he changed his mind a few times but landed on an "Angry Bird." I kept asking Chloe but she didn't really get it, and her answer kept changing. At one point Chase said, "Chloe, do you want to be an Angry Bird with me?" and she said, "Yeah!" I thought it sounded adorable so I just never asked her again and took that as her final answer. Chloe won 1st place for "Best Costume" in her class at daycare (Chase is in school now so they couldn't dress up). 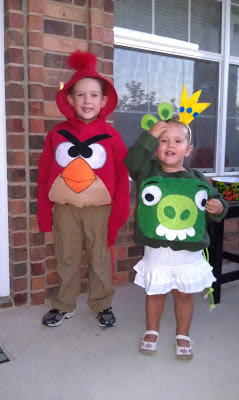 We went trick-or-treating tonight and the kids had so much fun (and made out like bandits... it's going to be TORTURE having this much candy at my house)!! 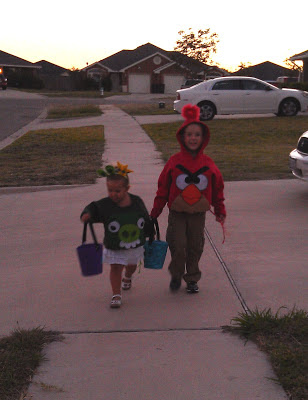 When we got home we carved pumpkins.  Yes, I know it's late, but my head just isn't in the game 100% of the time these days with everything I have going on.  I had told the kids we would wait to carve pumpkins til last night so they wouldn't rot.  I always have them on Tuesday nights so I figured it would be perfect... until they were at their dad's this weekend and I realized I had made arrangements for him to take them last night because I had an appointment.  Oops.  I knew Chase would be upset if we didn't get to carve them so I gutted all three pumpkins myself last night so all we had to do today was carve the faces into them.  Chloe designed hers, and Chase designed his and mine.  Our masterpieces: 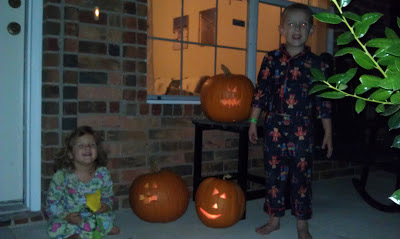 As for my costume this year....  This past weekend I went down to a Halloween party in San Antonio to be a part of the Teenage Mutant Ninja Turtle team (with my friend Katie and two other friends): 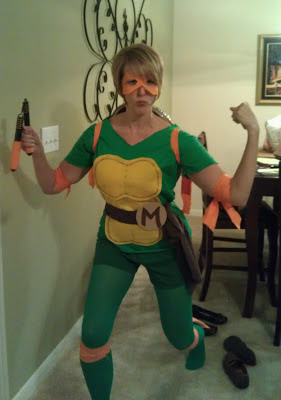 But for trick-or-treating tonight I kind of paid homage to the late 80's/early 90's.  It was kind of by accident.  This week is "Spirit Week" at school and I thought today was "Flash to the Past," so I crimped my hair, went crazy with the blue eyeshadow, pulled out my infamous middle school NKOTB t-shirt, tight rolled my jeans and added some gaudy accessories: 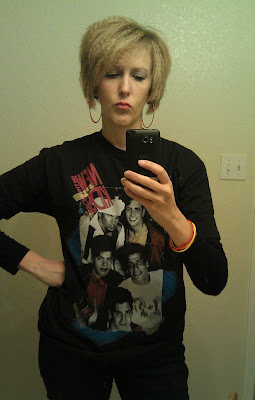 Then I got to school and realized I had my days mixed up.  "Flash to the Past" day is tomorrow.  Oops.  Luckily today was crazy hair day so I de-accessorized a bit, unrolled my jeans and took the NKOTB shirt off (thankfully I had a long-sleeved one under it because it was cold today).  I had to deal with the fact I was wearing horribly ugly tennis shoes, but at least my hair was crazy... so I still had spirit!  Anyway, when we went trick-or-treating I figured I'd just go with it and put my t-shirt back on.

Happy Halloween!  If you want some more candy, please come to my house!!

P.S. There are more photos in our Photo Album if you're interested!

My school had our Hispanic Heritage Celebration tonight and I took my kids to it. They got to hang out backstage while my students waited to make their appearance. Chase thought that was really cool, and I was amazed Chloe stayed quiet! After the show there were fun activities for everyone to do. First stop: A family photo! 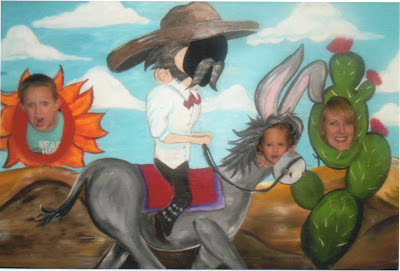 (I felt bad that Chloe had to be the ass, but she wasn't tall enough for anything else!)

Then we checked out the arts and crafts.  Chase made a beaded necklace of the Texas flag and Chloe made a beaded bracelet and a tissue paper flower, which we thought would be perfect in her hair! 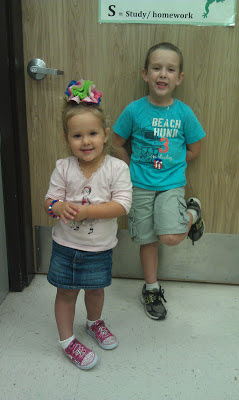 As I was getting things cleaned up in my room afterward they had fun drawing on the board, so I had to leave it there for my classes to see the next day.  I have learned that my students LOVE seeing/hearing about my kids, and they ate this up! 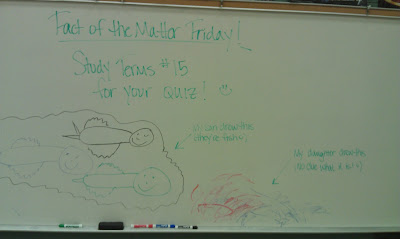 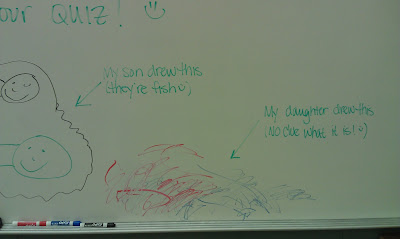 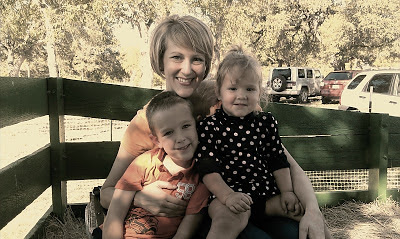 'Tis the season for pumpkin patches! This weekend we hit two of them. Saturday we went to the local pumpkin patch to simply pick out our pumpkins for carving. We ended up choosing very quickly because it started to rain! I did get a couple cute pics in before we left, though! 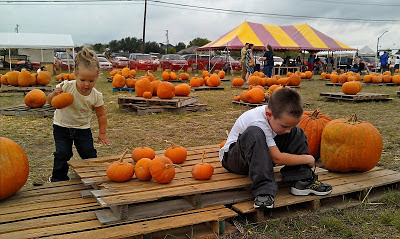 Today we went to the Silo Christmas Tree Farm for their annual pumpkin patch events.  Chase had fun with the duck game (the same one he loved back in 2009!): 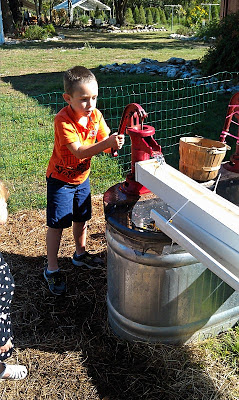 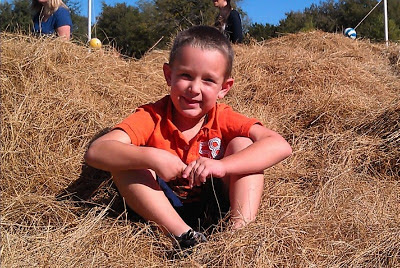 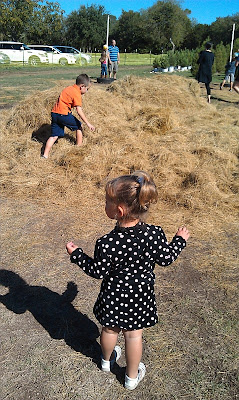 We ended the day with a hay ride (which is where the top picture in this post came from).  It was lots of fun.  Happy fall!

P.S. More photos are in our Photo Album if you're interested!

Tomorrow is "Nerd Day" at Chase's school and he had a lot of fun tonight getting into character! He doesn't really know what a nerd is (just TRY explaining it to a 5-year-old without making smart people sound uncool!), but he knows he's supposed to "look crazy" and of course he loves that! 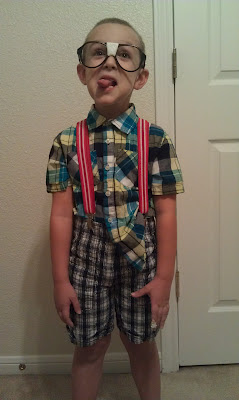 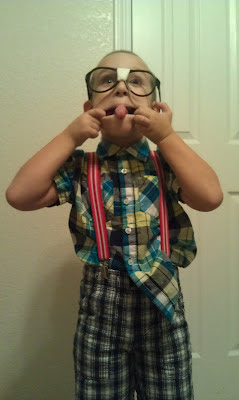 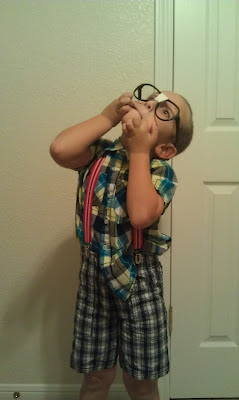 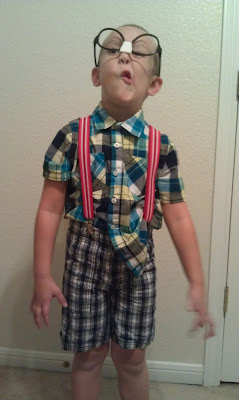 I love my little nerd!