Happy Halloween! Brian brought the kids over to my house before trick-or-treating so I could get some pictures of them in their costumes.  I made Chase's costume again this year and Brian was in charge of Chloe's.

Chase obviously chose his costume, and he also chose Chloe's to match.  I am proud to say that BOTH of our kids won the best costume awards in their classes this year!  That's twice in a row for Chase (SCORE)!  Yes, I'm proud.  Anyway, I present to you... Mario and Princess Peach! 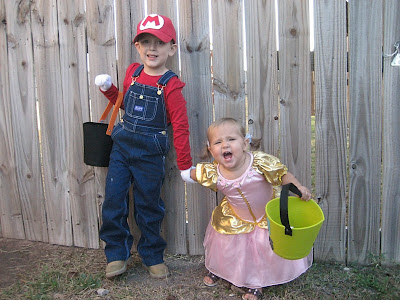 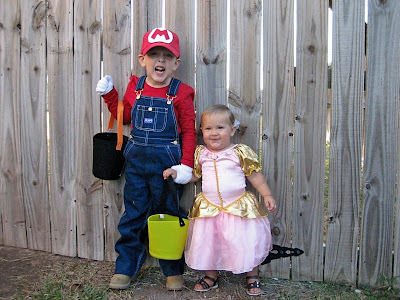 (I posted both of those pictures to show how impossible it is to get both of them smiling at the same time!  When one is happy, the other is either unhappy or making a crazy face.  Ah, well.)

Then we attempted one with me!  Chloe would not stay still, and Chase just watched our struggle, apparently enjoying the show: 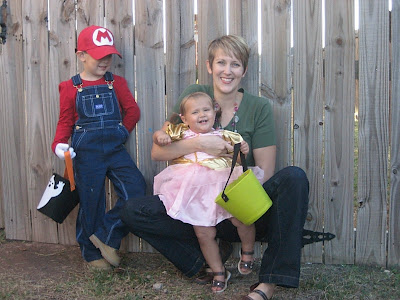 We took a ton of photos, hoping to get just one decent one.  This is the last one we took, which is a pretty good reflection of how we were laughing at the pure insanity of the wiggle worm situation: 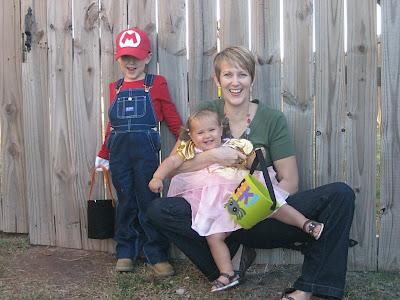 Chloe had a great time playing with the pumpkins on the porch, and decided Chase's jack-o-lantern was a chair! Chase was not a fan of that idea ("No, Chloe!  You're going to squash it!!"). 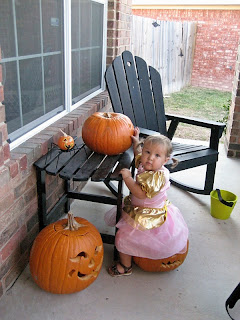 More photos are in our Photo Album if you're interested.  Happy Halloween! 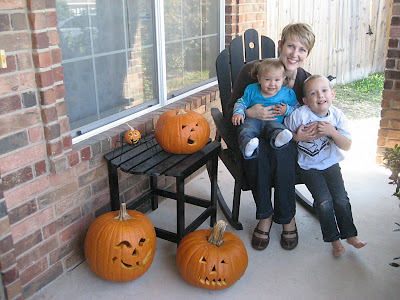 Tomorrow is Halloween! We had an eventful weekend preparing for the day.

My amazing friend Katie came for the weekend and I made her be domestic with us. I mean, we had pumpkin carving that had to be done!  Chase was so sweet at the pumpkin patch.  I picked my pumpkin out right away, and so did he... but then it took forever for Chase to find the perfect pumpkin for his baby sister.  It was so sweet because nothing he found was good enough for her.  I'm so glad we finally found one that was up to his standards!

My mom made me a "pumpkin carving apron" (because she knows I don't do much of anything else in the kitchen that would warrant an apron) and Chase loved it, so he got to wear it: 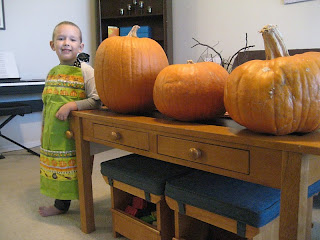 Gutting is the fun part (ha!) but Chase does not like to touch the goo. Katie gutted Chloe's and Chloe just sat there and watched us all get messy! 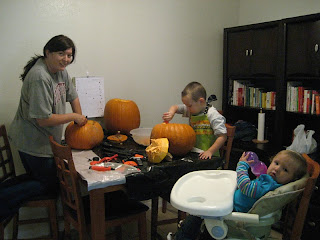 Chase got to design his own jack-o-lantern face this year, and he also drew his sister's! 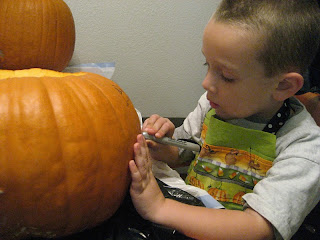 And here are the finished products!  All original artwork by the three (OK, two of the three) C's, with special thanks to Katie, our gutter/carver assistant! 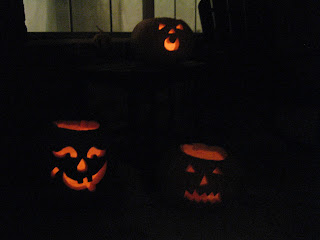 After pumpkin carving we started working on cupcakes! Now, you know my history with cupcakes... it's hit or miss. This year I decided to make jack-o-lanterns, which required a lot of candy carving... which Katie was so kind to help me with! 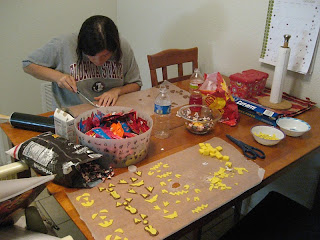 We screwed up the first batch of orange frosting trying to get the right color, and on the second attempt I still didn't get it the color I wanted (it looks a bit like silly putty) but it works: 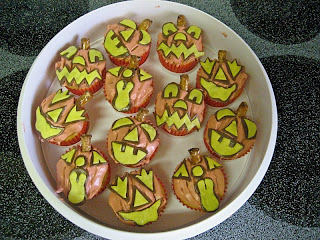 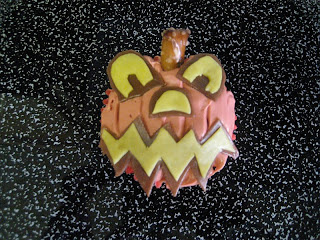 Then last night Katie and I went to a Halloween party! We were the cutest ceiling fans EVER: 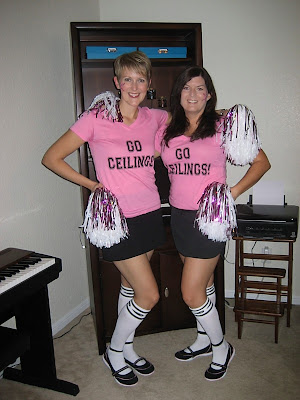 I can't wait for you all to see the kids in their costumes tomorrow! They are going to be so cute! (Oh, the suspense!)

More photos of our weekend are in our Photo Album if you're interested! 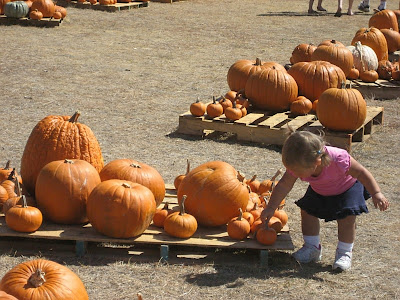 I took the kids to the Harker Heights Pumpkin Patch Carnival today, and the kids had tons of fun!  Chase had a great time in the bouncy houses, while I chased Chloe around the pumpkin patch: 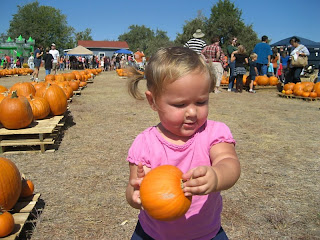 A nice lady saw us roaming around and offered to take our picture: 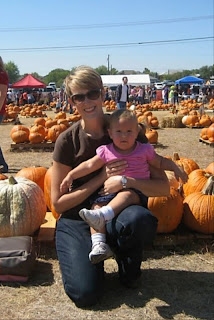 Chase invented a game for his sister where he would "hide" a pumpkin in the path and then say, "Chloe, look!" to watch her run for it. It was so cute. 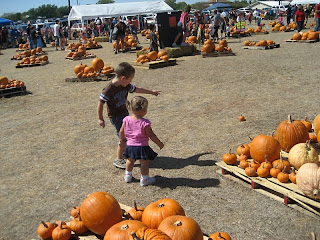 I tried to get the cute "kids in the pumpkin patch" shot, but, well... I wasn't quite successful: 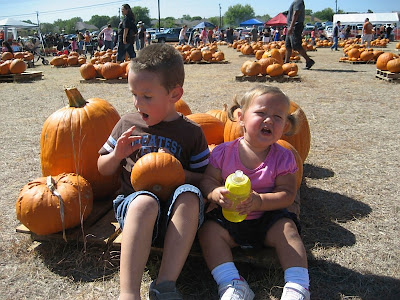 (But I do love that shot nonetheless, because it makes me laugh!)

We also went on a hay ride. After we boarded, the guy working it offered to take pictures for anyone who wanted them. He got to us and I gave him the camera, only to get this shot in return. I'm not quite sure who he thought he was supposed to be taking a picture of here: 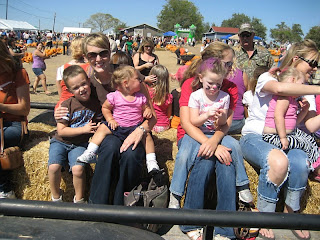 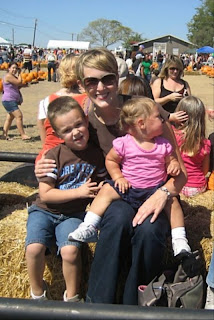 We decided to try to take one ourselves: 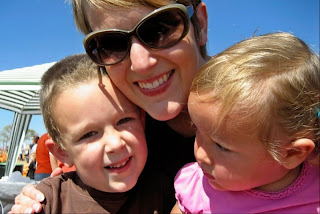 It was a fun day, though hot! It still feels weird to do Halloween stuff in the heat!  I miss my chilly fall weather from up north!

More pics of our day are in our Photo Album if you're interested!

Chloe had her 15 month checkup last week. Here are her stats!
My baby girl is chubby-licious!

Last night we went to a birthday party at Chuck-E-Cheese for one of Chase's friends.  Chloe is fearless, and she ran around like she owned the place.  She climbed right up on the merry-go-round as it was moving and rode the horses around and around and around again.  Of course I couldn't get her to look at the camera but at least you can see her reflection in the mirror here! 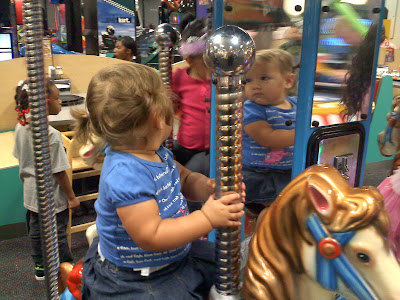 A random little kid came up to me at one point and said, "She has a big belly, doesn't she?"  I said, "Yes, she does!" and he said, "Maybe you should buy her a bigger shirt."

Email ThisBlogThis!Share to TwitterShare to FacebookShare to Pinterest
Labels: Chloe

So the other day as Chase was brushing his teeth I was messing with my hair in the mirror. Chase looked up, mouth full of toothpaste, and said, "MOM!  You look like Justin Beiber!" 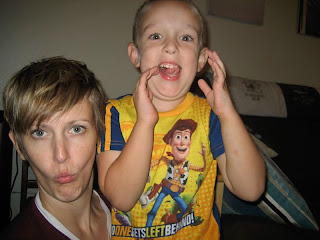 Then things just got silly! 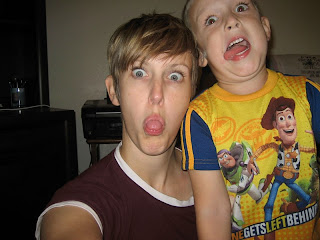 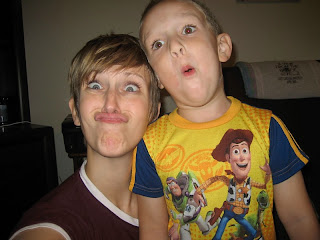 If you want to see more of our crazy photo shoot, look in our Photo Album!

P.S. This is like my fifth post of the day (it's "blog update day!") so check out the previous posts if you haven't already!

Email ThisBlogThis!Share to TwitterShare to FacebookShare to Pinterest
Labels: Chase, Conversations With a 4-Year-Old

Conversations With a 4-Year-Old: Costume Choices

It's about that time of year! Chase needs to decide what he wants to be for Halloween so I can do my motherly duty and make his costume. As usual, he keeps changing his mind. So I just keep asking, because eventually he will land on one costume and make a decision. Until then, I am going to post all the answers that come out of his mouth as they happen. Ready? Chase's answers to "What do you want to be for Halloween?"
I will keep this list updated as I get more responses!

Email ThisBlogThis!Share to TwitterShare to FacebookShare to Pinterest
Labels: Conversations With a 4-Year-Old, Holidays/Special Events

Morning People We Are Not

I have never been a morning person. Ever. My mom and I have some horror stories we could tell about our mornings together growing up.... Mornings that involved her physically dragging me into the bathroom and closing the door (where I would turn the shower on and curl up on the bath mat to go to sleep again). Any roommate I have ever had can vouch for the fact I had an obsession with my snooze bar (sorry to those of you who had to live with that!). I STILL hate mornings. But now I have to worry about getting my own kids up and around in the morning. And it looks like my mom was right when she said, "One day you're going to have a child just like you!" It's the ultimate payback, I guess.

Chase is impossible to get up in the morning. When I have him during the week we have to leave the house by 7am, and it takes him at least 45 minutes to get ready. It's ridiculous. When I go in there at 6:15 to gently wake him up he yanks the covers up over his head and yells things like, "Leave me alone!" or "It's still dark outside!" or "I'm tired!" or "You're not my friend!" And then I spend the next 45 minutes yelling things like, "Chase, hurry up!" or "Brush your teeth!" or "Stop entertaining your sister and EAT!" or "Apparently you're going to go to daycare in your PJ's today.... Get your shoes on!"

So I decided the kid needed to be introduced to the alarm clock. I talked to him about how he's getting bigger, and grown-ups use an alarm clock in the morning, and isn't that cool? Ha. Anyway, he seemed to think it was cool so I put his clock radio on a loud country station and set it for 6:00, figuring it would give him some time to slowly wake up on his own. I set out his clothes and told him when he was ready in the morning to put them on.

The next morning I got out of the shower at 6:15 and thought, "OK... moment of truth!" I was looking forward to hearing that country music blaring, but when I walked out of the bathroom I heard nothing. Huh. That's weird. I walked down the hall toward his room and it was completely dark. I looked at the clock and saw that familiar blinking dot I know so well.

My 4-year-old found the snooze button.

Now, I will say... things have gotten better. He no longer hits the snooze (after I explained he could just lay in bed and listen to the music for awhile), but he still doesn't get up on his own. I taught him how to read the clock, and he knows he has three jobs to do before 7:00, and must do them in this order: clothes, teeth, breakfast. He lives for breakfast, so it seems to be a good incentive to hurry up and get those other two things done so he can eat.

I'm trying to train him now so I don't have to drag him into the bathroom every morning like my mom had to. Ha! We'll see how that plan works out....