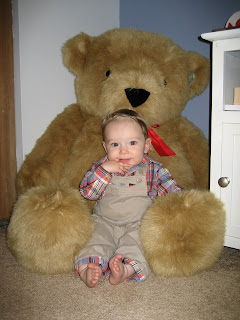 It's hard to believe, but Chase turned 8 months old on Thursday, and commemorated the event by learning how to crawl on Friday! Here is his 8 month photo.

Click here to compare it to his 7 month photo!

You can also see a slideshow of all his month photos on Chase's Info Page, FYI. [Update 1/18/08: This page no longer exists. If you would like me to email you a slideshow of the progression, let me know!]

Yesterday I finally got a new car to replace my 1999 Oldsmobile Alero, which screamed at me every time I turned the air on! It's a red Mazda CX-7. I can't quite park it yet and I don't know if I'll ever feel comfortable pulling it into our tiny 1-car garage... but I LOVE IT!!!!
at August 15, 2007 4 comments:

We Have (Another) New Niece! 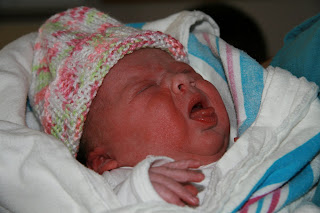 Welcome to the family, Addison Elaine! Here is a funny photo of her yawning. What a sweetheart!

Chase got a new toy from his Grandpa W right before we left for California, so when we got back we put it together kind of as a reward for being such a trooper on the trip. :)

Anyway, the toy is kind of a walker where the walking part revolves around an activity table. I managed to capture on video the first time Chase discovered he could MOVE. His facial expressions are priceless (you don't need to view this with sound... the face says it all)!

We spent the last week in California for my brother, Jeff's wedding. Here's a photo taken of the 3 of us with Jeff, his then fiance/now wife Julia, and my adorable niece, Rhianna: 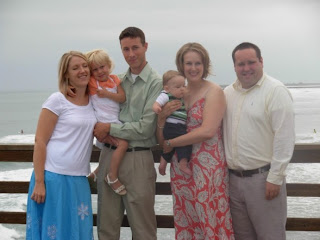 The wedding was absolutely beautiful... picture-perfect on the beach in La Jolla, CA. I hear the reception was nice, too, but we weren't there to see it. We spent the evening with Chase in the emergency room instead.

Yes, after he spent the entire wedding with his head buried into my shoulder, completely unresponsive to everyone and everything, we took him back to our hotel room, took his temperature, and called our doctor. She said to take him to the ER so that's what we did. When we got there his fever had risen to 103.7 and they rushed us right in.

Our poor baby had to have an IV put in, which took them three attempts while Brian pinned him down and I cried in the corner. He then had X-rays taken (to check for pneumonia) and blood drawn. They pumped him with antibiotics and fluids, and by the end of the night he was looking and acting much better: 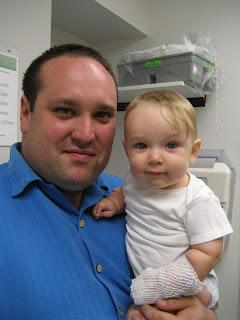 The next day we had to go back for a follow-up visit (since we obviously couldn't follow up with his regular doctor!) and blood test results. The tests looked pretty normal and just indicated some sort of viral infection. So we've been drugging him with Motrin and Tylenol every 2 hours since to keep the fever down.

He had a rough couple days, on top of being exhausted from all the activity and the time change. By Friday he was doing much better so we took him to the beach just long enough for me to be able to snap a few photos of his first experience at the ocean: 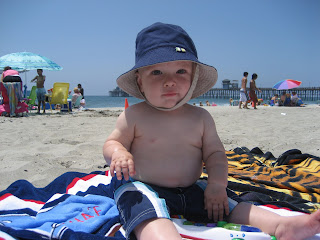 I have to say, though, that my kid is one heck of a trooper. His strength through it all seriously amazed us. But now that we're home... Brian and I need a vacation!!!!

My photos are posted in our Photo Album, but since my parents were also in CA with their cameras (and are even more trigger-happy than I am), I didn't really bother taking pictures at any event where they were present. As soon as I get their photos, plus the ones the wedding photographer took, I will post those as well.