Conversations With a 2-Year-Old: The Value of Money

This conversation took place the day before Chase's 3rd birthday.

At Christmastime we usually find a family to help out with Christmas gifts. This year our school sponsored some families of needy students and I sponsored a 4-year-old sibling of one of our students. I chose a small child because I wanted to involve Chase this year to try to teach him about the spirit of giving and all that good stuff. I wasn't sure how much he would understand but I really wanted to try.

Now because of confidentiality I didn't actually know who we were sponsoring, but we thought it might help Chase if we had a picture of a kid we could show him. So Brian printed a picture of a random little boy off the internet and we told him this little kid didn't have many things so we were going to buy him some presents for Christmas. On the way to Target I worked hard to explain things to him, pointing out that while he has lots of toys and clothes, some people don't have a lot of things. He seemed to be getting it pretty well and the whole shopping experience was a good one. He helped pick out the items for the little boy, saying things like, "I think the little boy would like this one!" and "Ooh, the little boy would love that!"

On the way home we talked some more about it and in the midst of our conversation Chase said, "Mommy, the little boy doesn't have money?" I was floored. Not once in my explanation of what we were doing did I mention money, because I thought there was no way he would understand that concept. It was all about "stuff" and how Chase has more things than other kids have. How in the world did my 2-year-old understand that the reason the little boy didn't have things was because he didn't have much money? That just blew my mind!

At any rate, he got it. And I was so thrilled he got it. We are so fortunate and I really want to be sure Chase understands and values that, while embracing the concept of giving.

He did so well. The next day we brought him to my school so he could give our organizer the gifts. He handed them right over to her and said, "These are for the little boy." She thanked him and he said something like, "I have lots of stuff. I have trains and cars and balls...."

Conversations With a 2-Year-Old: Cleaning House

I can still say "Conversations With a 2-Year-Old" because he was 2 at the time.... I just forgot to post this until now!

Brian has wanted some Cutco knives for the longest time. He finally decided to get some and if you have a sales rep come to your house for a demonstration you get free stuff (vs. ordering online)! So Brian and I were cleaning up the house a bit to prepare for the sales guy's arrival when Chase stopped what he was doing, looked up at us and said:

Brian and I stopped what we were doing and just stared at each other in disbelief. We hadn't said anything to Chase about anyone coming over. He just knew someone was coming to visit because we were CLEANING!

OK, finally I have time to download a few pictures and a video from Chase's birthday! Chase did get some fun gifts for his birthday... 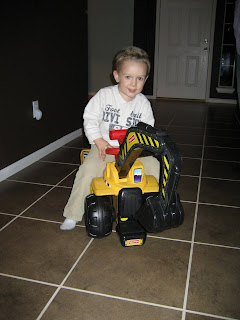 ...but he got just as excited about his cards! 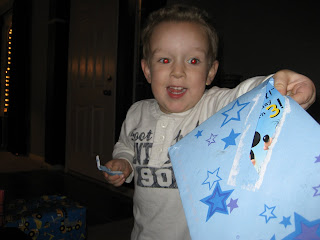 And here's a little video of him blowing out his candles (Facebook viewers, click "View Original Post" to see it). He had so much fun with the candles that's all he wanted... more candles! Eat the cake? NO... More candles!

Chase went to the doctor today for his yearly check-up and everything looks great! Doctor said he is 100% healthy. He is now 37" tall (50th percentile) and 34.6 pounds (75th percentile), which is pretty much exactly where he was at this time last year (percentile-wise)! Our little baby isn't a little baby anymore!
at December 18, 2009 No comments:

Chase celebrated his third birthday today. Can you believe it? I took some pics and videos but I have no time to download right now (school play opening tomorrow). I will post them soon, I promise! Look for them this weekend.
at December 16, 2009 No comments:

Need Christmas or birthday gift ideas for Chase? Here you go!
If you buy anything specific off this list, let me know so I can update it. This will be a "live" post (I will be revising the list as things change). Thanks!
at December 13, 2009 No comments: