I hope everyone had a wonderful Christmas. We sure did!  We decided a couple days before Christmas to take a "mini vacation" down to Austin to check out the Trail of Lights at Zilker Park, and stay overnight in a hotel.  The kids were totally excited, especially because the hotel had an indoor pool!

The light show started at 6:30 and our hotel was only a mile and a half away.  At 5:30 I called down to the hotel lobby and asked if we could get a shuttle there, and they said no problem.  So at 6:15 I went downstairs with the kids and an umbrella stroller, only to find out the driver said there was no way he could get us there with traffic, because they had roads blocked off.  The front desk lady said it was a 20 minute walk and pointed us in the right direction, so I decided to go for it.

Before I continue: Not long into this journey I realized something must have happened to the umbrella stroller in the move because it was incredibly hard to steer.  I felt like I got the reject cart at HEB (which, incidentally, I believe is every cart at HEB).  You know what I'm talking about.  Anyway....

Turns out the lady at the hotel pointed us in the wrong direction.  It didn't feel right so I asked a nice looking lady at a bus stop if we were going the right away.  She pointed us in a different direction and told us to cross the river at Lamar.  So we walked the way she told us to walk and ended up walking right into a construction fence.  I could see the lights so I took an alternate route toward them and we ended up walking down by the river.  No problem.  Except then we crossed Lamar... underneath it.  So we walked up a huge hill to get to Lamar to cross it, but Lamar is a VERY busy bridge.  I thought I saw a walkway there so we trudged along a very narrow dirt path to get to it, only to face a sign that said, "Emergency Use Only."

Chase was such a trooper.  In the beginning I thought we were doomed because he kept dragging his feet and saying, "I can't take it anymore!" (he gets his drama from his mama, it's true).  But then I turned it into a mission, and we talked about how we never give up, gave each other high fives and whipped out the GPS on my phone.  We finally did get there... after walking for an hour and a half.  And when we finally did arrive, this is what we found: 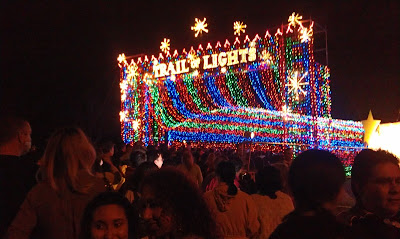 But it was beautiful.  Here's the first tunnel we walked through (very slowly): 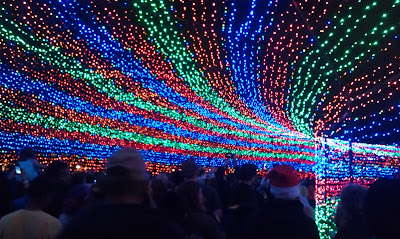 It was a slow walk through the park and what we could see of the lights was beautiful.  For the majority of it I was pushing Chloe in her crappy umbrella stroller (which has steering issues) with Chase on my back so he could see.  I felt a little like Super Mom (and a lot like Crazy Mom).

All in all we had a good time.  And the walk back to the hotel was only 40 minutes.  Chase was awesome.  When we got back to the hotel at 10:15 we just collapsed on the bed.  Chloe slept the whole walk home, folded over herself in the stroller, so when we got back she was wide awake and decided to get up and color at 11:30pm.  Not cool.  I finally dragged her into bed with me so she would sleep.

In addition to that adventure, the kids swam a lot in the hotel pool and they were really sad to go home the next day.  It was a fun last-minute getaway!

Chase was really into Santa this year. I showed him how to track Santa's route on the internet and he was tied to my laptop all day Christmas Eve: 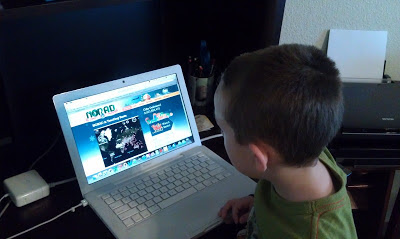 Then he had to show his sister: 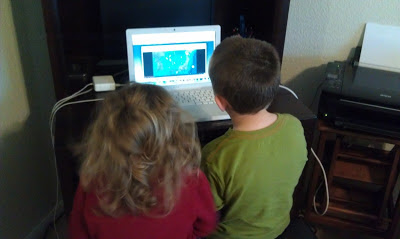 That night we went to see the Nature in Lights show at BLORA.  Chase took a ton of pictures with his camera.  Here are some of the better ones: 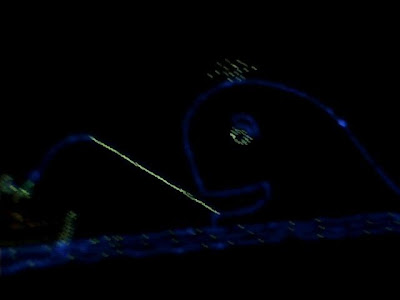 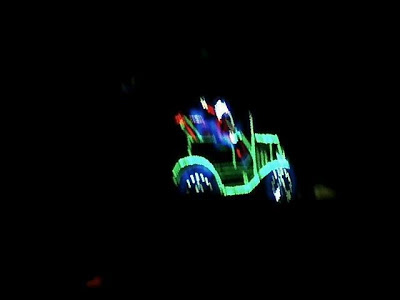 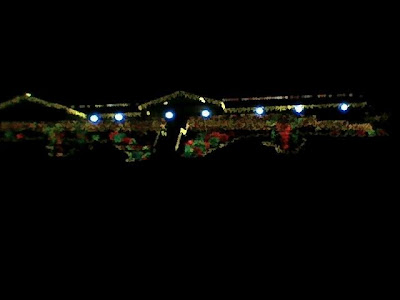 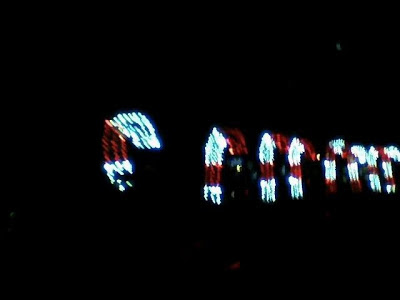 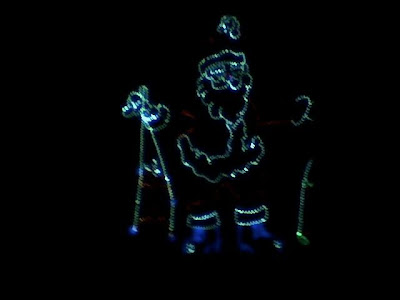 On the drive home the kids started getting crazy in the backseat so I said, "What was that?!?" and told them I just saw a weird light in the sky.  That occupied them the rest of the way home.  They saw crazy lights all over the place... purple, green, red....  Amazing stuff.  When we got home I finally got them to go to bed and 5 minutes after I left Chase's room he ran out and said he saw Santa!  I told him he'd better get to sleep then!

Santa did come and he was good to us. 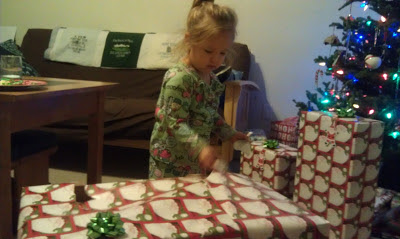 He brought Chloe a bunk bed for her baby dolls, which she had to use right away: 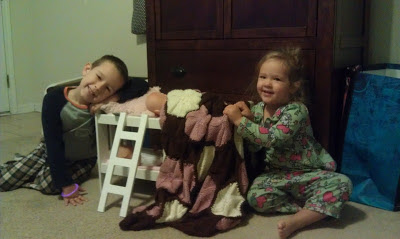 He brought Chase the BeyBlades Destroyer Dome he had asked for: 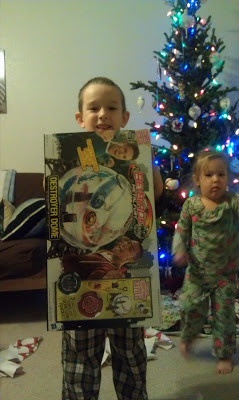 And he brought the whole family a surprise gift....  An XBOX 360 Kinect! 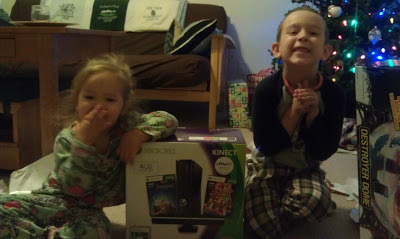 Later that afternoon we made a gingerbread train: 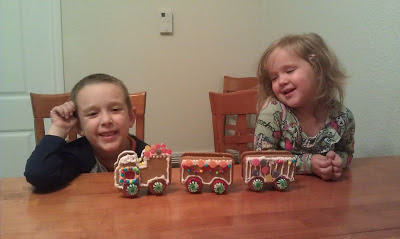 We had a very busy Christmas day!

Merry Christmas, everyone!  May the rest of your holiday be bright!

Sounds like Chase was real trooper! What an adventure! The lights look beautiful though! Glad you had a good Christmas!