Happy Birthday To Me!

Today was the big 3-5. I've been OK with every birthday up to this point, but 35 was a little tougher of a pill to swallow. I mean, it rounds up to FORTY!!!! But I'll get over it.

Those who know me well know I'm big on birthdays. If I had it my way the world would stop spinning every year on June 10th and everyone would drop everything they were doing to worship me. I believe it should be a national holiday and the only acceptable response to my requests on that day should be "as you wish." Just sayin'....  Ha ha!

Anyway, I trained Chase well. He counted down the days to my birthday for me, and this morning I woke up to "Mom?" and instead of the words that usually follow ("I'm hungry"), I got, "Happy Birthday!" What a way to start my day.

So since my birthday fell on a Sunday I decided the whole weekend should be dedicated to me. Saturday we celebrated at the splash pad with our friends Erin (my friend) and Nathan (Chase's friend)! 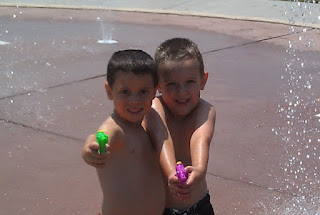 Chloe thought it was fun to glue herself between my legs... 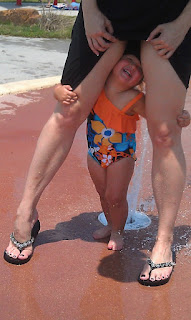 ...but after awhile I had to put a stop to that (ummmm... slightly uncomfortable in a public place!) and she had to pout dramatically about it (which she does really well): 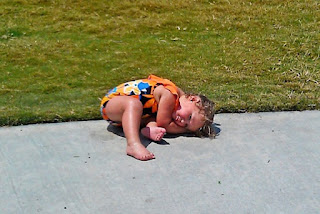 Today we decided to go to the park for a bit.  We tried the obligatory family self-portrait but were not very successful this time: 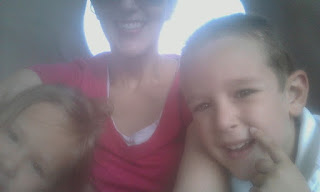 The kids had fun, though, and I got a few good pics of them: 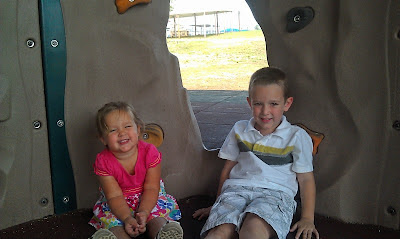 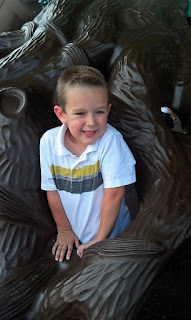 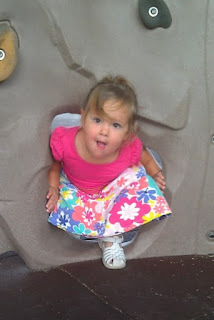 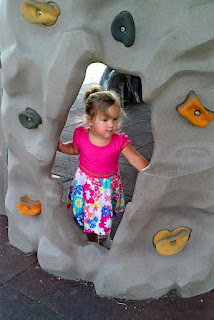 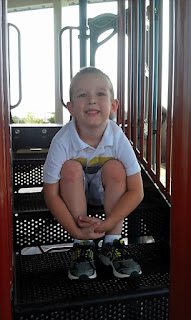 They had fun on the swings, too.  They had the weirdest looking swing there that Chase loved.  I'm thinking maybe it's a handicap swing or something? 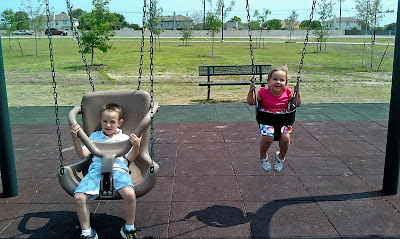 After awhile Chloe got tired of swinging so I put her down and Chase begged me to push him really high.  He was soaring through the air, and on the way back toward me Chloe bolted right behind him and BAM!  The back of his gigantic chair swing smacked her square in the face and laid her OUT, flat on her back.  It looked painful!  But it was pure comedy the way it happened.  She was fine, but there were a few parents around that were having a hard time holding back their laughter (as was I... I admit it)!

Afterwards we went through the Sonic drive-through (because it's my birthday so I can eat whatever I want).  I heard Chase in the backseat singing "Happy Birthday" and realized he was making a video:

When we got home Chase found a dandelion in the yard and rushed to get it for me.  "Mommy, I want to give you this flower for your birthday!"  It was the sweetest, most wonderful gift I received today... straight from the heart!

After lunch we had cupcakes and Chase recorded the event.  This, again, was taken with his camera so the video quality is not great.  But it is quite interesting:


When I saw it I said, "Chase, you chopped my head off!" and he said, "Well I was trying to get the cupcake!"  He definitely knows where his priorities are!  Anyway, it was cute.  Chase was jealous of my candle, though, so he had to have one, too: 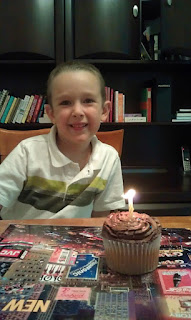 P.S. More pics are in our Photo Album if you're interested!

Loved your post...and totally accurate all the way. Of course, who else would like to be treated like a queen on her birthday? Just sayin'! The pics are great, but I have to say the jaw-dropper was your last line. If YOU are half-way to 70, what does that do to ME?????!!!!!