Last Saturday we went to the Mizzou game at Baylor, thanks to tickets Brian got from his sister for Christmas. We had a good time. Chase was a bit stir crazy, but we managed. Once he saw the Baylor Bear mascot, all he wanted to do the whole game was go meet the bear and say hi. So toward the end when the game was getting the most stressful for Brian, Chase and I literally chased down the bear. He was in the stands on the other side of the stadium, so I counted the doors and we went for a walk. I went as far as I thought I needed to go and we walked in only to find out we had gone too far! So we backtracked, called Brian on his cell to say, "Do you see us? Do you see the bear? Where do we have to go?" He steered us in the right direction and we eventually caught up to him. Chase said hi and gave him a high five and then he was pretty happy. It was still a long game for him to sit through, but he did pretty well, considering he's three! Anyway, here are some pics from the game (again, taken with my phone, since I somehow forgot my camera... shame on me!): 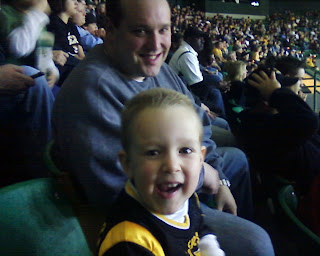 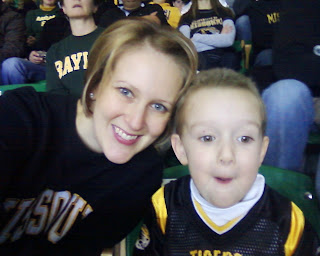 On the ride home Chase passed out in the backseat: 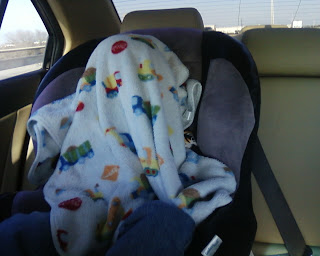 He has a new habit of wanting his head covered up when he sleeps. It is so weird to me!
at February 17, 2010

Isaac has always loved to cover his head up when falling asleep in the car! It's cozy!!!